Police refuse to release bodies until she pays for DNA testing 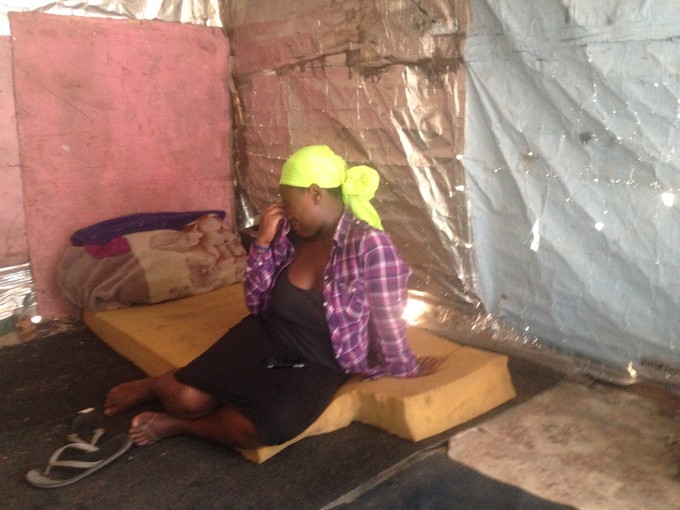 Bongiswa Joyce lives in this shack in Marikana, Philippi. In December her two children died in a fire. Photo: Thembela Ntongana

Oyisa and Asenathi died in a fire in Marikana, Philippi on 10 December. They were just three and four years old. More than a month later their mother Bongiswa Joyce is still unable to bury them. She has been blocked from doing so by bureaucracy and a lack of money.

Joyce, 22, doesn’t have any close family members. Her mother died when she was very young. Her father remarried and she has had to move from home to home. The father of her two children was arrested so Joyce and her kids had to move in with a friend because she is unemployed and couldn’t support the children on her own.

She has not been receiving a grant as she does not have an ID and could not register her children to get birth certificates.

Joyce sits on a mattress in a dark one-room shack with no windows. This has been her home for the past few weeks, after her friend’s shack burnt, killing her children. She uses a candle for lighting and gets food from neighbours as she has no family support.

On 9 December she left her two children with her friend to find a place to sleep because her friend had a visitor and there was no space for her.

The next morning her friend came to visit her where she was sleeping. The friend said that the children were fine. When they were still talking one of their neighbours came to tell them that there was a fire at the shack that they stayed in.

“We didn’t believe it because my friend had just come from there. So I put on my shoes and we ran to see what was happening,” said Joyce

When she got there much of the shack was already burnt including the bed that the children were sleeping in. Residents managed to put out the fire but the children had already died and were burnt beyond recognition.

“I don’t understand how the fire started because the stove and the lights were not on. I still don’t know what happened and I am not getting anything from the police,” said Joyce.

The area has no electricity so Joyce and her friend used paraffin stove and lights.

Joyce says she has been to the police station more than once to try and collect her children’s bodies. But she was told by the investigating officer that she must first either pay R3,000 to have DNA testing done to identify the children, or wait for the state pathologist to do this which could take up to three months.

“I don’t want to wait for that long to bury my children. It has been too long already,” said Joyce. “I don’t have the money to bury them but I want to know where my children are buried. I want to see their resting place. They are my children.”

In Xhosa culture people are usually buried two to three weeks after their deaths.

Both South African Police Service (SAPS) spokesperson Captain Frederick Van Wyk and Captain Bheki Xulu of Philippi police station confirmed to GroundUp that the investigating officer explained to Joyce that there are two ways of getting the DNA tests done, privately which they estimated costs approximately R3,000, or via the government which takes time.

“The bodies of the children must be identified first in order to be released to the family but in this situation DNA [testing] is the only possible option,” van Wyk said

GroundUp asked SAPS why it takes so long for the state to do DNA testing, but the police referred us to the Western Cape Department of Health. The department’s Forensic Pathology Services eventually referred us back to SAPS: “We are only responsible for the autopsy which is to get the cause of the death, and we give our findings to the police. We do not get involved with DNA [testing] because it is part of the investigation that the police do,” said spokesperson Darren Francis.

Robert Daniels, also a spokesperson for Forensic Pathology Services, told GroundUp that on average DNA testing takes between three and seven working days. “I don’t know why you were told it takes so long,” he wrote to GroundUp.

A police detective at another station in Cape Town also told GroundUp that SAPS does its own DNA testing and that it can take up to three months or more. He confirmed that they do get help from a private lab should a person want the results quicker, and he confirmed the approximate R3,000 price tag, but another source told GroundUp it should be considerably cheaper than that.

Another doctor who wished not to be named explained to GroundUp that the Western Cape government insists on DNA testing to identify unrecognisable dead people to avoid problems later on, such as claims that misidentified people have been buried in the wrong place.

The cause of the the fire is still being investigated.