“I cannot stand here and lie by saying all is well” 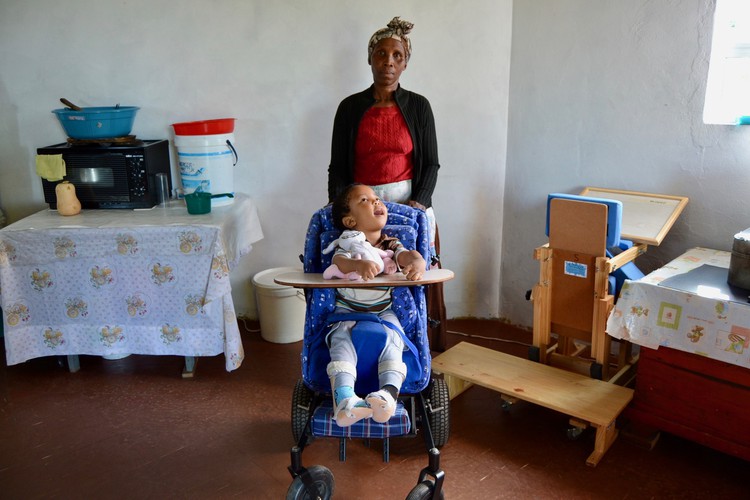 Mivuyo Patuluko is three years old. He uses a wheelchair and has epilepsy. He does not speak. When his mother passed away in 2015, there was no one to look after him.

So his aunt, Thembeka Sam, gave up her job as a domestic worker in Beacon Bay, East London. “I told my husband that we cannot abandon this child just because his mother is no longer alive. I took a decision to stop working so I can look after him,” she says.

Sam and her husband have a 15-year-old son. They all live in one room, and the house is not suited to a person using a wheelchair. Sam’s husband is a construction worker, but sits without work during the rainy reason.

Sam is 50 and her own health is not good; she suffers from hypertensive heart disease. Every second month, she has to go for treatment at Duncan Village Day Hospital.

The village where the family lives has no tarred roads. Sam must carry Mivuyo on her back for three kilometres until she reaches the tarred road to get transport to take him to the local clinic nine kilometres away. Because of his epilepsy, which can strike at any time, he is frequently in and out of Ngxingxolo clinic.

Mivuyo gets a R1,600 social grant. Doctors at Frere Hospital advised Sam also to apply for a grant-in-aid which can be used to supplement disability grants for families in severe financial distress. But SASSA officials told her that she can only receive the grant-in-aid when Mivuyo turns 18 (which is correct in terms of the law).

“I cannot stand here and lie by saying all is well, but I do not regret the decision of looking after my nephew,” says Sam.