Woman faces eviction after 51 years on a farm

200 people under threat of eviction in Simondium, meeting told 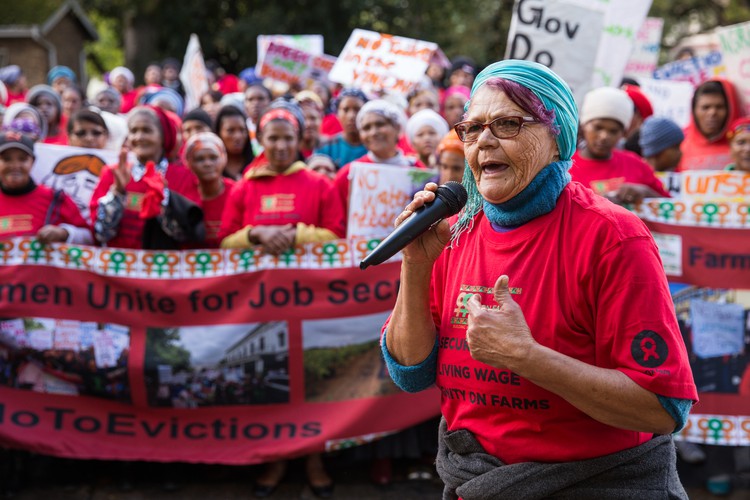 Corina Kanah faces eviction from the farm where she worked for 51 years. Photo: Ashraf Hendricks

“I can’t afford to buy myself a house or rent. The little I earned as a farmworker, I used to put my children through school,” says Corina Kanah from Simondium near Stellenbosch.

Kanah was speaking to a hall filled with mostly women farmworkers at an event organised by the Women on Farms Project on Tuesday. Representatives from the labour department and the Commission for Conciliation, Mediation and Arbitration (CCMA) also attended the event, as well as Alan Winde, the provincial minister of Economic Opportunities.

Many of the workers spoke about not having safety clothing when working with pesticides or of having to relieve themselves in the bushes because there were no toilets in the field. They also called for “a living wage” and for an end to forced evictions of farm dwellers.

At an indaba on farm evictions hosted by the South African Human Rights Commission in April, Drakenstein municipal manager Lauren Waring admitted that the municipality had become “a hotspot for evictions” with 1,127 pending eviction matters at the time. The Commission said then that it would write to President Cyril Ramaphosa asking for a moratorium on farm evictions.

On Tuesday, farm dwellers in Simondium said that about 200 people were currently facing eviction in the area. Kanah is among this group who say they are being forced out of homes they have lived in for decades.

Kanah said she had worked on the farm now known as Marlenique Estate for 51 years before she was retrenched in 1999. She lives in a two bedroom house on the estate with her adult son and a grandchild.

In February she received an eviction notice from the new owners. “We were meant to appear at the council offices a few weeks ago. When the new owners’ lawyers saw all the supporters who went with us and Women on Farms, they cancelled the meeting. I am still waiting to hear from them,” she said.

“I worked and stayed there all those years. Now I have to move out. It’s not right,” she said.

Jacques Botes, also from Simondium, said farm workers’ conditions were “getting worse”. He said many did not have access to drinking water at their homes or only had access to poor quality water.

MEC Winde told the workers that jobs in agriculture were “under huge pressure” in the Western Cape. “Mainly because of the drought.”

He said he expected a drop of 7,000 jobs in agriculture this year compared with 2017.

Winde promised to work closely with the organisation to resolve some of the complaints by workers.

Winde also urged parents of young children to send their children to school. He said in the Piketberg area, they found only 27% of children who lived on farms were attending school.

He said there was an agreement with the municipality that people had to show that their children were attending school in order to qualify for municipal subsidies. “We hope this will have some impact,” he said.

Makoae said many of the workers from Lesotho did not have valid documents and were forced to accept low salaries on farms. “It’s hard for us. The farmer lets us work separately from the South African workers. Those workers also get a tea break while we are expected to work right through,” she said.

Chief inspector for the provincial labour department, David Esau, said the department would now be working closely with Home Affairs to monitor undocumented workers. “Last week I got a request in the Koue Bokkeveld for 800 work permits for Lesotho nationals. I asked why these jobs couldn’t be given to locals?” he said. “Regardless if you are documented or not, the farmer still has to adhere to the law of the land and treat workers equally,” he said.

Responding to several questions about why inspectors only interview two or three workers when they visit farms, Esau said, “I have 140 inspectors. We have to visit over 6,000 farms so we can’t be expected to stay two or three days at the same place to interview 40 people … We will try to work with Women on Farms to arrange a meeting with all of the workers.”

Esau also warned workers not to be misled by invitations to become shareholders in farms. This, he said, was often a smokescreen. “If this is proposed to you, go check what percentage your share actual is. In most cases we find it’s just 0.01% of the company,” he said.

Kevin Samuels from the CCMA urged workers to get help from Women on Farms in filling out complaint forms and submitting them to the authorities. “I can assure you that it will be dealt with within 30 days,” he said.