Woman can’t keep the dog that saved her life

Scotty rescued Nonzame Vuyi in a shack fire in Cape Town; now he may have to be sent to the Eastern Cape 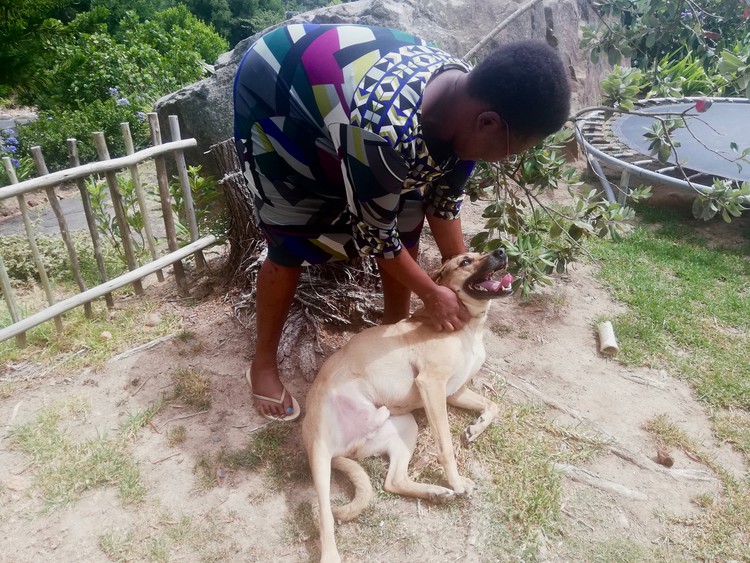 Nonzame Vuyi with her dog, Scotty, whom she visits twice a week. Photo: Thembela Ntongana

“Do you know how painful it is to not be able to afford to buy even a R30 pantihose for your daughter to wear at school?” asked Nonzame Vuyi, a 41-year-old resident of Imizamo Yethu.

Vuyi sleeps on a mattress on the kitchen floor of her sister’s two-room shack. In the morning she folds away the mattress to make space for four children to bath.

Vuyi recently returned to Imizamo Yethu after living in Khayelitsha since 2015. She had stayed in Imizamo Yethu for 17 years. She moved with her husband after she lost all their belongings in a major shack fire in 2015. Her two children remained with her sister to be close to school in Imizamo Yethu. She visited them on weekends.

“In 2010 there was a fire and we lost everything … again in 2015 and we decided to move and go rent in Khayelitsha. Then I lost my job at the end of 2016. After that we struggled to afford to pay the rent because my husband was also unemployed and working gardening piece jobs,” said Vuyi. “We heard that people were occupying a piece of land now known as Vosho [in Khayelitsha] and we went and built ourselves a home there.”

They moved to Vosho informal settlement in March of 2017. But on 3 January 2019 they lost their home once again, the third time, to fire. Vuyi also nearly lost her life.

She was seven-months pregnant and on the night of the fire, Vuyi said she had struggled to fall asleep in her room because it was too hot. She and her husband went to sleep in the kitchen where there was also a bed kept for when her children visited on weekends.

“Scotty [her dog] was barking non-stop and I kept pushing him away but he would not stop,” said Vuyi. “He then stopped barking and climbed the bed to lick my neck and face … When I woke up, the fire was already at the night-frill. Our bedroom, where we were supposed to sleep, was already burnt down. I pulled my husband out of the bed and Scotty, and we ran outside. If it wasn’t for him [Scotty] you would be hearing a different story now,” said Vuyi.

Because her sister’s shack in Imizamo Yethu is too small, her husband has gone to stay with the family in the Eastern Cape.

“Now my family is separated; my husband is all the way in the Eastern Cape, without a job because he does not have an ID [burnt in the fire]; Scotty is living somewhere else because I do not have the means to accommodate him,” said Vuyi.

“I used to provide for my family but I am now seen as a beggar by people because I have to go around asking food so we can eat. I do not know what the child I am carrying now [expected in March] is going to eat and wear,” said Vuyi.

Her sister works two days a week as a domestic worker. They have social grants for the children, but most of it is spent just on transport to school.

Twice a week Vuyi visits Scotty who is with a family that has agreed to keep him temporarily. When Scotty sees Vuyi walking up the driveway he barks and tries to find ways to exit the gate and climb the fence. Once the gate opens, he jumps onto Vuyi and starts licking her face.

Without a job and permanent home, Vuyi will have to send Scotty to stay in the Eastern Cape with her husband.