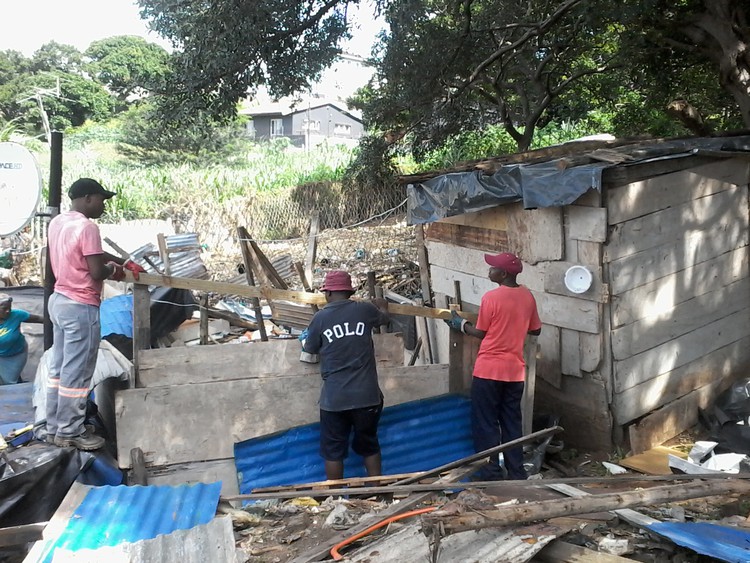 A woman was shot in her leg, allegedly by security personnel, during a demolition of shacks that took place in Durban on Thursday afternoon.

The demolition was carried out by a contractor for the eThekwini Municipality at the Mathambo informal settlement in Redhill. Residents said that six shacks that had been erected in 2016 were demolished. Three more that were being rebuilt were also demolished.

Residents told GroundUp that security personnel used teargas and assaulted them. They also claimed that their goods had been damaged, including furniture and food.

According to people we spoke to, earlier that day a woman began building a shack in the settlement but residents told her she may not build as there was not enough space. They went as far as destroying the structure she was erecting.

“After 4pm, a group of security officers came and went straight for the shacks at the back, they started destroying shacks and when they were questioned about a court order, they started assaulting people who were questioning them,” alleged Mongezi Sompibi.

It’s unclear if the two events are related.

Despite the demolitions, by Friday morning rebuilding had begun.

Residents said they are constantly worried about demolitions even though they have been living in the area for years.

Thozama Mahleba alleged that he was teargassed. He said that his only crime was pleading for shacks not to be demolished. “They were waving guns around, shooting in the air and threatening people. Most people here are traumatized about what happened. All of this happened in front of children,” he said.

Area committee member Ndodeni Dengo said he tried to explain to the security officers that the illegal structure had already been destroyed in the morning, but officials continued to demolish. “I am encouraging all the injured to go to the police station and lay charges against the company. It is not right for people to be treated in this manner,” Dengo said.

Despite the moratorium on demolitions during the Covid-19 lockdown, last week City spokesperson Msawakhe Mayisela told GroundUp that demolitions were within the ambit of the law. He said the lockdown does not mean that lawlessness should prevail.

Mayisela said the City does not demolish occupied shacks, only unoccupied ones to prevent “land invasions”.

“Lockdown does not mean people must break the law and that is not going to be tolerated,” he said.

But on Friday, Mayisela condemned the use of force or demolishing of occupied structures. He told GroundUp that he would follow up on the Mathambo incident to find out what happened. He also encouraged injured residents to lay charges with the police so their allegations could be investigated.

SAPS confirmed that a case of attempted murder was being investigated after it was alleged that a 50-year-old woman was shot in the right leg during the demolition.