Wolwerivier’s only creche threatened with closure on Monday 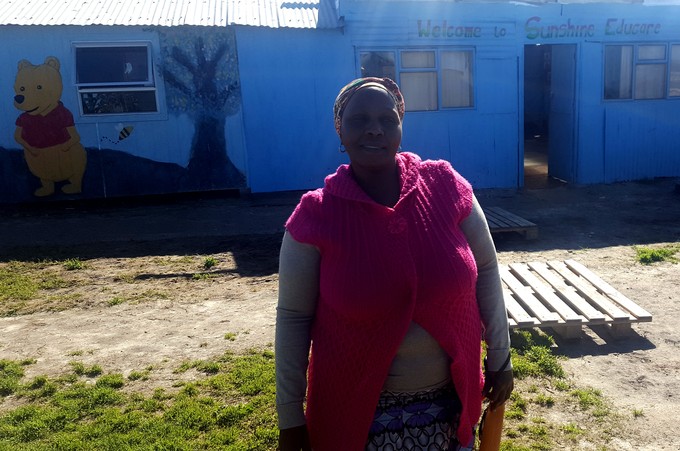 Nowongile Swebe says parents oppose the closure of Sunshine Educare and they will do anything to make sure that it doesn’t happen. Photo: Mary-Anne Gontsana

The only creche in Wolwerivier faces closure on 8 August because the City of Cape Town says it is on land which has been zoned for agriculture and it does not comply with building regulations.

Pretorius told GroundUp that mayoral committee member Suzette Little had asked her if she would be prepared to run pre-schools in the area. (Little told GroundUp that Pretorius had been told she could put the creche up temporarily.) She had negotiated with the City for a piece of land and been promised sewerage connections and water.

But these had not been provided. “They only gave one tap. I had to extend it to the creche at my own cost. We use pota-potas, no flush toilets, even though there are flush toilets everywhere else here.”

Pretorius said she had been told to close the creche because the City said she had spilled out onto land that was zoned for agriculture.

“But I was here for 11 months before they had objections,” said Pretorius.

The blue creche is just a few metres from the entrance to Wolwerivier. When GroundUp visited, children were running around and playing outside and others were in the classrooms being taught. At the back of the creche, spinach, turnips and potatoes were growing in a vegetable garden. It is the only care facility for children in the settlement.

The City’s Mayoral Committee Member for Human Settlements, Benedicta van Minnen, said the creche fell outside the “approved” area. She said the creche did not comply with National Building Regulations and health and safety conditions had not been met.

“There are children concerned in this matter and the City cannot simply turn a blind eye.”

The safety of the children was “of paramount importance”, van Minnen said. “Having found that the conditions and health and safety considerations have not been met, the City cannot allow this operation to be operated as a rogue operation.”

The land belongs to the City’s Human Settlements Directorate.

According to regulations, a creche must have a fire extinguisher, exit signs and escape routes, a secondary fire escape if there are more than 50 children, and approved building plans.

Sunshine Educare does have fire extinguishers and signage at an exit door.

Pretorius said she could not get building plans because the City had “failed to provide a land use or rental agreement” although she had been asking since last year.

The creche currently accommodates 107 children. Van Minnen said the City had a contingency plan to place the children in nearby schools.

When asked for this plan, the City’s spokesperson, Priya Reddy, told GroundUp: “We are not at liberty to divulge the plan, for operational reasons.”

Reddy also said the children would be accommodated at a nearby educational centre. It’s not clear where this centre is. Wolwerivier is several kilometres away from the nearest urban centre.

Van Minnen said in terms of a notice issued on 9 May 2016, Pretorius had to comply with the minimum requirements by 8 August.

Meanwhile, parents have signed a petition asking the City not to go ahead with the closure. But Van Minnen says the City had communicated with the community regarding this matter and this was about the safety of their children.

Nowongile Swebe, who helps out at the creche, has two grandchildren, aged three and one. “We are so thankful for Nikki. My grandchild started here at three months; he is three years now. This creche has given our children a safe environment and we are not even paying a cent. She buys our children clothes, she takes them out, she does so much.

“The City cannot even put up street lights here. They cannot provide school transport for the children who are currently roaming the streets here as you can see. Now they want to take away this creche. Where was the City when Nikki started this creche? The hard work she put in, now they want to take it all away.

“As parents we do not want Nikki to leave.”