Wolwerivier is the only option for Woodstock evictees, court told 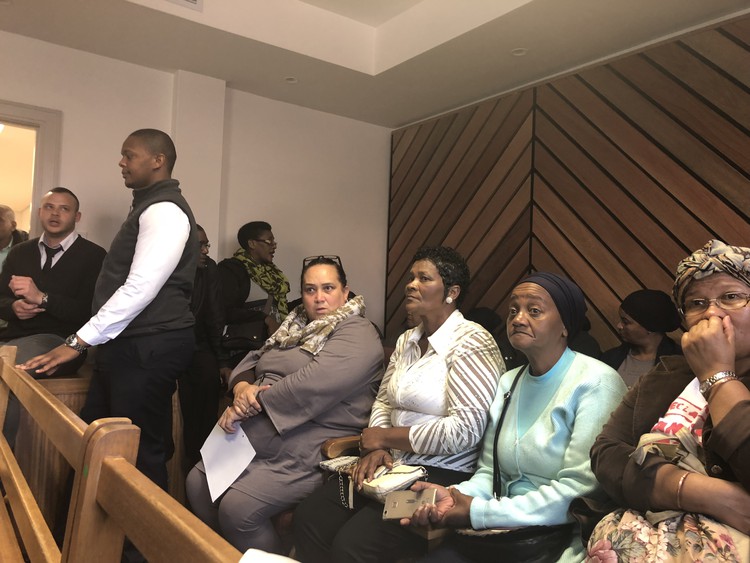 The Wolwerivier settlement is the only immediate option the City of Cape Town can offer families facing eviction from Albert Road, Woodstock, Councillor Brett Herron told the Cape Town Magistrates’ Court on Wednesday.

Herron, who was Mayoral Committee member for Transport and Urban Development, urged the 14 tenants facing eviction from Albert Road, Woodstock to consider applying for social housing. Meanwhile, he said, Wolwerivier was the only option.

The Albert Road residents oppose being moved to Wolwerivier.

Herron was the first witness to take the stand in the packed courtroom. Before he was sworn in, he informed the court that he had retained his position as councillor after the DA moved to dismiss mayor Patricia De Lille and the Mayoral Committee was dissolved.

Herron said the City had decided not to use the temporary relocation area at Blikkiesdorp any more but the Wolwerivier area was still available.

“We only have one option to offer anybody who is facing eviction: Wolwerivier.”

Under cross-examination by the tenants’ lawyer, Mark Owen, Herron said: “Yes it is problematic, but Wolwerivier remains the place the City owns. It’s not meant to be permanent accommodation.”

He urged the families to apply through the Social Housing Authority for social housing in Steenberg, Milnerton, Bothasig and Belhar where he had been informed that three or four vacancies arose every month.

Owen complained that the City had not helped the families to find social housing.

“The council never said to my clients, ‘Here is an option.’”

Responding to a question from the magistrate, Herron said a reasonable time frame for the families to find social housing would be six months. He said that in the recent Bromwell Street case people who faced eviction got houses within a month.

City engineer Waleed Adams also testified. Asked by Owen what features were offered by Wolwerivier, Adams admitted the area was far from other houses and transport.

“My clients took it upon themselves to go and see what Wolwerivier looks like,” said Owen. “It is isolated”.

He said the nearest MyCiTi bus stop was 10km away, the nearest train station 15km away, Melkbos clinic 10km away, Dunoon clinic 12km away, and schools were out of reach. He also said the roads in Wolwerivier were gravel, there were no shops, and the only local clinic catered only for young children and was open only twice a week.

Ahmed Ebrahim, the lawyer for the landlords, said the Albert Road families had refused to move to a place they were offered by the City, and had never attempted to seek alternative accommodation. He also claimed that none of them were paying rent.

In his closing arguments the City’s lawyer Quinton Williams said: “Wolwerivier is isolated but you can still get there.”

“There are no schools but children in the area are still going to school,” Williams said, to protests from the families in court. “The City has at least done what is in its mandate: provide shelter to people facing eviction.”

Magistrate Jethro answered, “The court has to be fair, and people can’t be on the streets… They have been living there for 20 years. It’s a lifetime.”

Faghmeeda Ling, one of the residents facing eviction, showed GroundUp an email she said she received from the City’s lawyer advising her and others to opt for social housing for which she qualifies. “But,” she said, “I think not even five people out of the list qualify.”

Several of the residents told GroundUp they would never take the Wolwerivier option.

Jethro said legal representatives could make additional submissions by 23 May and he would then inform the lawyers when he is ready to hand down judgment.