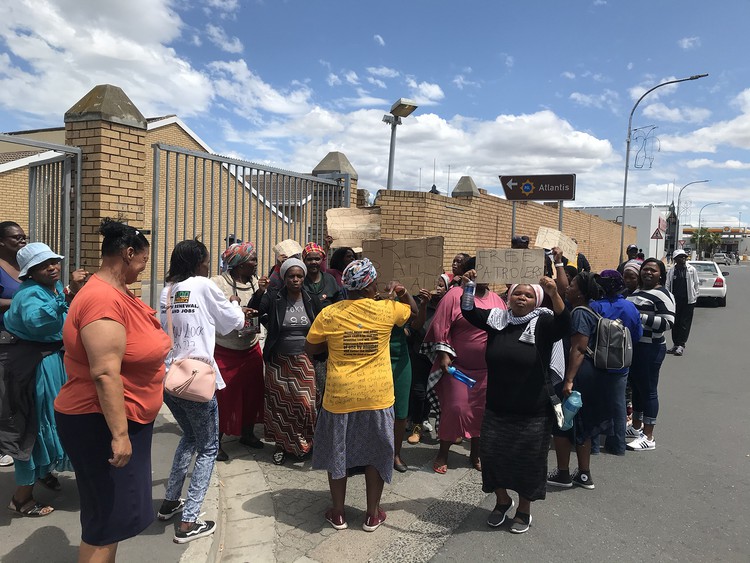 Residents of Witsand on the West Coast protested on Monday at the arrest of members of a street patrol in their area. Photo: Peter Luhanga

Residents of Witsand near Atlantis on the West Coast protested outside the police station on Monday, demanding the release of 12 members of a community patrol.

The 12 were arrested last week.

Community leader Lamla Booi said Witsand residents had been robbed on their way to report crimes at the Atlantis police station, 15km away. There is no police station in Witsand.

Booi, who led Monday’s protest, said the 12 people who face charges of assault, kidnapping, attempted murder and behaving in a threatening manner, were part of the patrolling group. He said the group’s 100 active members armed themselves with sjamboks and knobkerries and patrolled the streets from 10pm. He said they confiscated dangerous weapons from “thugs” and sjambokked them “to teach them a lesson”. They had decided that shebeens must be closed at 10pm.

“We had to set up a rule that all shebeens should be closed at 10pm and that the streets should be empty after 10pm,” said Booi. He said protesters wanted the 12 residents to be released immediately with all charges dropped.

Nosange Mvoto was one of the residents demonstrating outside the Atlantis police station chanting slogans denouncing the police. All placards had one message: “Free all patrollers”. She said she had joined the demonstration because the patrollers had helped to curb crime in the township.

Another resident, Harold Motolwana, said there was a “huge challenge” in the township.

Booi said the group had been busting drug lords in the township, confiscating their drugs which were handed over to the police. But the drug lords were soon seen back in the community, he said.

When GroundUp left the police station at 2pm on Monday, the residents had vowed to not leave up until their fellow residents were released.

Though GroundUp asked detailed questions, the Western Cape provincial police provided a general response: “Atlantis police are aware of a protest action that occurred in Atlantis this morning by the community members from Witsand. Members were demanding the release of the suspects who were arrested. SAPS invites anyone who is unhappy with police conduct to lodge an official complaint for the allegations to be investigated,” said Siyabulela Malo, a police officer in the provincial communication department.

When questions were sent back to him, he did not reply and ignored calls to his cellphone.