Student leader calls for Sandton to be shut down on Friday 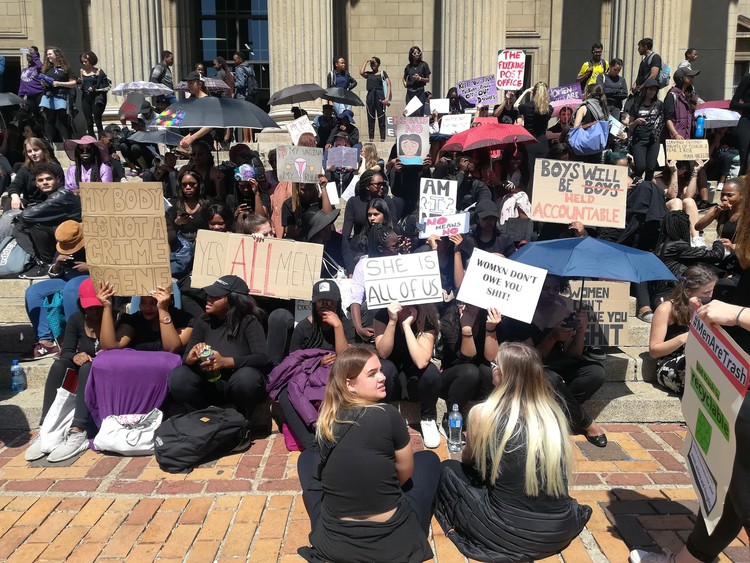 Wits students wore black and purple on Monday as they joined the countrywide protests against violence against women. Photo: Zoë Postman

On Monday, hundreds of students dressed in black and purple marched through Wits University campus demanding that the administration act against violence against women and make the campus safe for women and queer people.

The march at Wits followed a week of marches in Cape Town and other cities. The outcry was sparked by the rape and murder of 19-year-old Uyinene Mrwetyana, a film and media student at the University of Cape Town.

The memorandum, read out by outgoing SRC President Sisanda Mbolekwa, demanded that the university increase security visibility, have increased lighting on campus, make safety kits available at Wits clinic, give self defence equipment like pepper spray to students every month and offer free self defence classes to students.

It said the university should have a victim-centred approach in gender-based violence cases and that rape cases should be prioritised. The demand to remove perpetrators of violence against women from the university campus was met with loud applause from the crowd.

Geraldine Fraser-Moleketi, the Chancellor of Nelson Mandela University (NMU), also attended the march. She commended the students. “There is a need to render our country a safe space for all women and vulnerable people … We are proud of the position that [students] have taken and we stand with you,” she told the crowd.

She said it was important for people to start thinking about sustainable ways to address gender-based violence beyond the march “so that we don’t end up raising the same issues [years later]”.

Mbolekwa said it was important for Wits students to stand up against gender-based violence happening across the country because students were members of society before they were students. “This university campus is a microcosm of society so what happens out there happens here. … We have these pests in our community as well,” she said.

Black Womxn Caucus chairperson and founder Keitumetsi Moutloatse said: “We are convening because there is a serious crisis in this country: the crisis of women and children being killed. Something needs to change.”

She said femicide and gender-based violence was not new to Wits. “In fact some of us have been taught by these perpetrators.”

She said there were multiple protests against violence against women happening across the country and they would not stop unless there was a fundamental change in the country.

She urged people to shut down Gauteng, specifically Sandton, on Friday. “Our president has said there is no money to fund the fight against gender-based violence so we will go to Sandton and show him where the money is,” she said.

She said the issue of gender-based violence was a social crisis and everyone was responsible for fighting against it.

Carol Crosley, the university’s registrar, accepted the memorandum and promised to take it to management.

A night vigil and interfaith prayer began on Monday evening outside the Great Hall as this article was published.