Union leader calls for campus to be made ungovernable on Tuesday 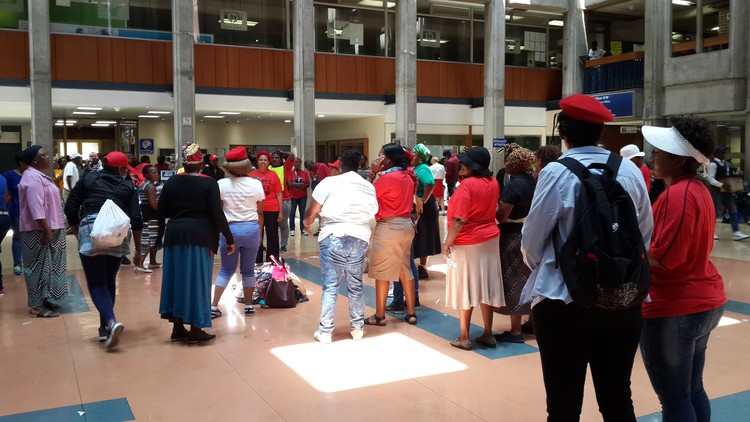 Wits workers await the outcome of a meeting between management and union leaders on Monday. Photo: Zoë Postman

Negotiations between University of Witwatersrand (Wits) management and workers’ unions ended in a stalemate on Monday. The unions have demanded that the lowest earning staff member earn about R10,000 as opposed to R7,000 a month.

The National Union of Metalworkers of South Africa (NUMSA), the majority union at Wits, and the National Health Education & Allied Workers Union (NEHAWU) represented the workers at the meeting.

The strike started last week Tuesday when the workers demanded a 12% increase in salaries, but Wits offered 8%.

Chairperson of NEHAWU Wits branch, Paati Sam Mangena, came out of the negotiations to inform the workers of the progress. He told the crowd of workers that there were some “discrepancies” in the agreement Wits management had drafted so they had to send the unions’ lawyers to read through it thoroughly.

One of those discrepancies was that workers would not be paid for time on strike. Mangena said the union leaders negotiated that the strike days be taken from the workers’ leave days, instead of their salary which Wits agreed to.

He said the second discrepancy was that the union wanted to “harmonise salaries”, claiming that some workers were paid more based on their race.

One worker expressed her frustration about the lack of progress. “We have been striking since last Tuesday and nothing is happening. Why were we instructed not to disrupt the meeting because everything is operating as normal now,” she said.

Mangena said the workers could not disrupt because Wits interdicted the strike so anyone who disrupted would be taken to court. He also said that if there were any disruptions, Wits would ensure that the workers were banned from the property and they would not be able to take other workers out of their posts if it came to that.

A technician at Wits, who asked to remain anonymous, told GroundUp that he had been working at Wits for 36 years. He said he was striking because he had five children and a wife to take care of but the salary he was getting was barely enough to get him through the month.

“We are hungry and hungry people are angry people. If [Vice-Chancellor Adam] Habib does not sign the agreement today, we will shut down this university,” he said.

But Columbus Ncuthe, NEHAWU Gauteng Chairperson, told GroundUp that the unions and Wits management had agreed on the salary increases but had not agreed that the entry level positions should earn at least R124,000 per annum.

“Wits said they could not sign because our demand was a policy issue and they would have to create a committee to deal with that. We said the strike will continue until we have a signed agreement, so the strike continues tomorrow,” said Ncuthe.

In his address to the workers, Ncuthe said they should be ready to “intensify” the strike and make the campus “ungovernable” on Tuesday.

The meeting between the unions and Wits management ended late and we were unable to get comment from management in time for publication.