Wits accuses protesters of having a political agenda 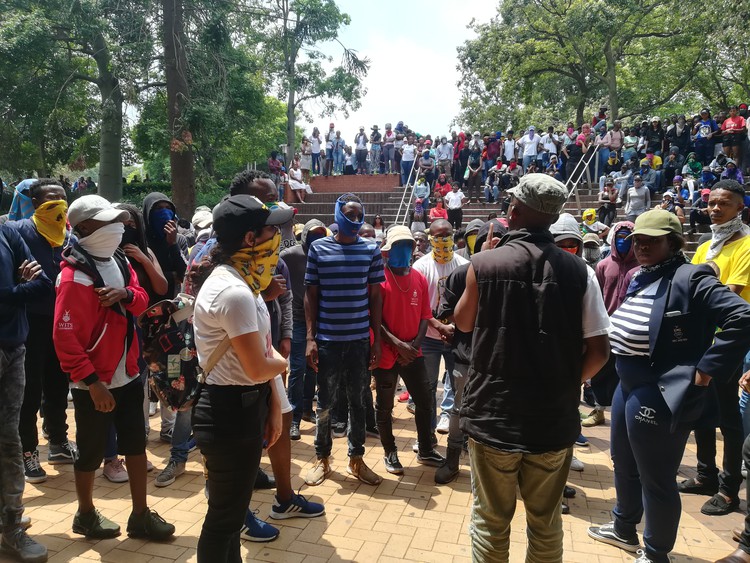 A group of about 200 students, led by the Wits Student Representative Council (SRC), protested against an accommodation shortage and financial exclusions on Thursday. It was the fourth day of unrest at Wits. Photo: Zoe Postman

Activities at Wits University were brought to a halt as student protests entered a fourth day on Thursday. About 200 students, led by the Wits Student Representative Council (SRC), went door-to-door across campuses, stopping lectures along the way.

In its letter of demands sent to Wits management last week, the SRC said it wants all students who were granted space at the university to be allowed to register, regardless of their debt. It is also demanding that Wits provide accommodation for all students. The SRC also wants the requirement for upfront payments for academic and accommodation fees for students from households with annual incomes of less than R600,000 to be scrapped.

“Our fellow students are sleeping in toilets and libraries because they don’t have a place to live. Some of our students are not sitting next to us in class because they can’t register. That can’t happen,” said SRC President Sisanda Mbolekwa.

She assured the students that those participating in protests would not be expelled or suspended. “We, as the SRC, put our bodies on the line for you. We are your first line of defense so we will be the first to be held accountable,” Mbolekwa said while addressing a crowd of students.

Earlier in the day, students barricaded one of the entrances to Wits. Police were called and used stun grenades to disperse the group.

Protesters also tried to get into the accounting building but private security blocked the entrance. A scuffle between two groups then broke out, with students and private security throwing rocks at each other. When police arrived the students made their way back to the Great Hall.

By mid afternoon, a large group of students had gathered outside the Great Hall, expecting to hear from the university’s management.

Instead, Wits released a statement accusing those spearheading the protests of not having the students’ interests at heart. “Their aim is to disrupt learning and to hold higher education institutions to ransom in order to advance their own political agenda,” it said. “Their agenda has nothing to do with free education but is rather a deliberate attempt to destabilise our university.”

Wits said it would not allow the futures of 32,000 students to be “held to ransom by a small group of people trying to use the university for their own political gain”. Wits warned that students involved in shutting down the campus could face suspension or be arrested by authorities.

Wits said it had provided urgent accommodation and food to hundreds of students in recent weeks. It said the university had also created a hardship fund, which is worth about R13 million, to help students register.

To date, Wits said it has assisted 187 students over the last two weeks. It also awarded funding to about 80 students for urgent accommodation and is considering another 200 applications submitted in the last five days.

In a statement late on Thursday, the SRC called off further protests.