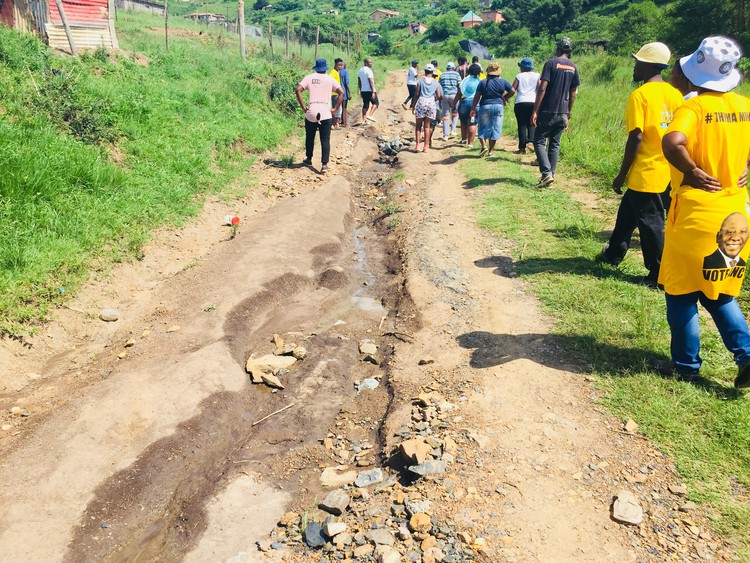 A dilapidated road, no electricity, intermittent water supply and a broken promise for new housing. These are some of the concerns residents of Bhakabha location in Willowfontein, Pietermaritzburg plan to raise at a meeting with government officials on Sunday.

The meeting follows a march by residents living along the main road which runs through Bhakabha on Monday. They demanded answers from ANC ward councillor Thabiso Molefe on the progress of a planned housing project. They also demanded that the dilapidated main road be fixed.

Residents say the pothole riddled road has resulted in taxis, ambulances and funeral hearses refusing to enter several communities along the route. Also at issue is the intermittent water supply to the location.

“The connecting roads from Tomu and other locations have had their roads fixed. We have been waiting since 2012,” said resident Shibase Zondi. He said that when officials from the housing department visited Willowfontein in 2019, residents were again promised that the road would be fixed, new RDP houses would be built, and street lights would be installed.

“Most people live in mud houses. Nothing has happened and we need answers on what is delaying all the promises,” he said. In the meantime, Zondi said that the condition is getting worse. “None of the cars are able to use the road. The clinic employees park their cars on the road side and it’s not safe,” he said.

Thandeka Makhathini from Manyinyisa in Bhakabha complained that the area’s streetlights have not worked for years. “The area is dark and walking at night is dangerous. People get mugged and we are not safe but we voted,” she said.

Makhathini said residents were waiting in anticipation for a meeting on Sunday in the hope of getting answers from government officials. “When they come here … they will have to travel with their big cars on this road and feel our pain. Due to the bad road conditions, people have to carry their loved one’s coffins because hearses refuse to drive here,” she said.

Department of Human Settlements spokesperson Mbulelo Baloyi said that the housing project in question was still at the planning phase. Asked why it has taken several years, Baloyi said that since the promise made in 2012, a feasibility study was done on the project. “The planning phase usually takes about 18 months. Thereafter the construction process kicks in depending on how fast the municipal’s due processes,” he said.

Baloyi added that a major delay on the housing project was that there were still graves on the earmarked land.

Ward councillor Molefe said: “The road is not the only problem [in the area]. Water, electricity and houses are still scarce in the area. It’s true that residents were promised a better road in 2012. That has not happened. If the departments don’t keep their promise, it affects me because residents believe I’m lying to them.”