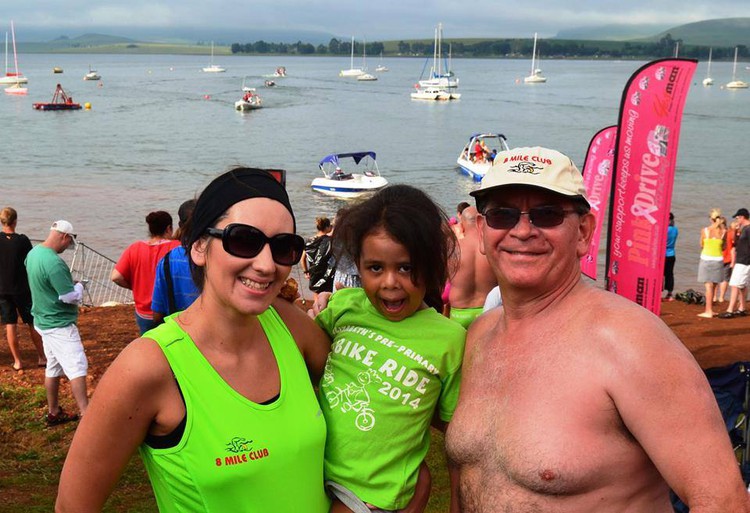 Taking the 8 Mile Club into wilder waters, Stanley Kozlowski and seven other adventure swimmers hope to raise R250,000 for eco-tourism, marine conservation and environmental journalism training by swimming a 22km stretch of the Wild Coast earmarked for heavy minerals mining. He is pictured here, at the finish line of the Midmar Mile, with his daughter, Nastassja Kozlowski and granddaughter, Gabriella. Photo supplied

A legendary charity swimmer has thrown his rubber cap and goggles in the ring, signing up for a “wild swim” to promote alternatives to heavy minerals mining on South Africa’s pristine Wild Coast. (See GroundUp articles on Xolobeni.)

Stan Kozlowski, who has helped collect more than R12 million for conservation and other good causes over the years, has now joined an eclectic band of ocean swimmers to tackle a 22-kilometre stretch of the Pondoland Marine Protected Area (MPA).

The Wild Swim will take place over five days from 26 April, coinciding with Freedom Day and Workers’ Day.

Although The Wild Swim happens well before the annual sardine run, which attracts predators in great numbers, including sharks, a comprehensive safety plan has been put in place, restricting the event to eight swimmers.

Given the safety precautions, including shark shields, Kozlowski insists the “men in grey suits”, hold little fear for him. “I’m afraid of the Sharks rugby players, not the animals themselves,” he quipped. “I have more concerns about crossing paths with a Portuguese man-of-war jellyfish, or an onshore wind blowing in a flock of blue bottles. Both of which can deliver a nasty sting.”

The swim from the Mzamba to the Mthentu estuary in the Eastern Cape province passes Xolobeni, an area which the Australian mining outfit Mineral Commodities Resources seeks to mine for heavy minerals. It is believed that its sand dunes contain titanium and other heavy mineral deposits worth an estimated R2.7 billion (US$185 million). These mining plans have divided the local community and drawn the attention of environmentalists who charge it will damage fragile ecosystems.

Amid this, Kozlowski believes The Wild Swim will highlight the area’s value to tourism and the need to protect the oceans that he loves dearly. He said he had witnessed how foreign-owned trawlers abused South Africa’s resources including in marine protected areas like the Pondoland. More must be done to stop this, said Kozlowski.

The grandad of six said he was equally concerned about the repercussions of heavy minerals mining and had little faith that those responsible would do anything to fix things.

The objectives of The Wild Swim have been endorsed by a growing number organisations as well as the co-founder of the Rand Merchant Bank, Pat Goss, a former director the Natal Parks Board (now Ezemvelo KZN Wildlife). Goss said heavy minerals mining would destroy the vast ecotourism potential the area holds, especially for traditional landowners in the area.

Webber, who won three gold medals for South Africa, said: “The Ocean is my playground and I am a fierce guardian of her, ensuring she is kept pristine and glorious for the generations to come.”

The two, as well as Kozlowski, are no strangers to spending long spells in the water. Kozlowski established the 8 Mile Club in 2004 at the annual Midmar Mile, the world’s largest competitive open water swimming event, held at Midmar Dam in KwaZulu-Natal province in February. The Midmar Mile consists of eight events, each one-mile long. The 8 Mile Club is a group of swimmers who compete in all the events.

Kozlowski had for many years swum all eight one mile events, raising funds for the Wildlands Conservation Trust, now the WildTrust. Inspired by this fundraising feat, Bremner encouraged a group of 28 other swimmers to join Kozlowski.

The money has gone to seven main charities, including the Childhood Cancer Foundation, Singakwenza Education & Health, and National Sea Rescue Institute, as well as 14 minor ones.

Now the 8 Mile Club is venturing into wilder waters, setting out to raise R250,000 by swimming the 22km stretch of Wild Coast earmarked for heavy minerals mining. The beneficiaries are two development agencies Africa!Ignite and Sustaining the Wild Coast (both with an interest in ecotourism), WildOceans (marine conservation), Pondoland MPA, and Roving Reporters’ associated environmental journalism training programme.

Plans to mine at Xolobeni date back more than 15 years, pitting members of the community against one another. This conflict is believed by many to have led to the murder of former Amadiba Crisis Committee chairman Sikhosiphi “Bazooka” Rhadebe, in 2016.

In November 2018 the Pretoria High Court ruled that before mining could take place in Xolobeni the community residing on the land must give consent that is free, prior and informed. The Department of Minerals and Energy is appealing against the ruling.

Riley is a political science and communications student at the University of Maryland. This story was produced with the support of the School for International Training (SIT) Study Abroad programme. Additional reporting by Craig Bishop. You can read more about The Wild Swim at Roving Reporters.