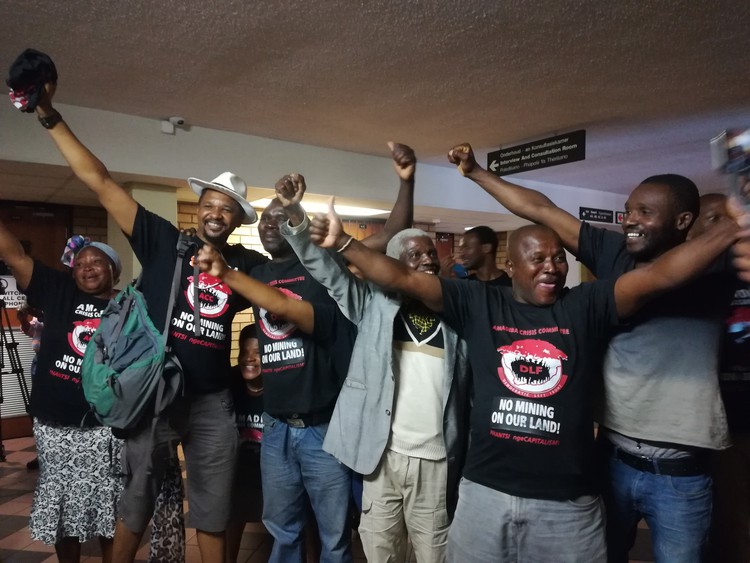 Xolobeni community members celebrated at the North Gauteng High Court after Judge Annali Basson ruled that the Department of Mineral Resources has to obtain consent from mining communities before granting a mining right to a company. Photo: Zoë Postman

In a landmark judgment on Thursday morning, the North Gauteng High Court ruled that the Department of Mineral Resources (DMR) has to obtain “full and informed” consent from communities under customary law before granting mining rights to companies.

Members of the Amadiba Crisis Committee (ACC) and lawyers from Richard Spoor Attorneys celebrated outside the courtroom after the judgment was handed down. ACC has been fighting against mining operations in Xolobeni, a village in Umgungundlovu on the Wild Coast.

“Right now we are so happy, I can’t even explain it,” said Siyabonga Ndovela who has lived in Xolobeni for 26 years. “Xolobeni is our land and our great grandfather’s land so we have to protect it for the sake of the Pondo people.”

The case follows a long battle by the ACC to prevent Transworld Energy and Mineral Resources (TEM) from getting titanium mining rights in Xolobeni. TEM is a subsidiary of Australian mining company MRC.

In the arguments heard in April, Advocate Tembeka Ngcukaitobi, representing the ACC, argued that “free, prior and informed consent” from a community is required before the DMR grants a company mining rights.

But Advocate Vincent Maleka for the DMR argued that Section 23 of the Mineral and Petroleum Resources Development Act did not list consent from the community as a criterion for granting a mining right.

In her judgement, Judge Annali Basson said the Xolobeni community may not be deprived of their land without their consent. She said the community had a right to decide what happens with its communally owned land.

“It is well documented that customary communities such as the applicants, tend to suffer disproportionately from the impacts of mining activities as they are directly affected by the environmental pollution, air borne diseases, loss of their farm land and grazing land, forced displacement and the loss of community amongst other things,” she said in the judgement.

Judge Basson said the DMR “lacks any lawful authority” to grant TEM a mining licence before it complied with the Interim Protection of Informal Rights to Land Act 31 of 1996. The Act, she said, requires the DMR to obtain the “full and informed consent” of the Xolobeni community before granting TEM a mining license.

Judge Basson ordered that the costs of the application be paid by the DMR and TEM.

Although the community members were happy, Ndovela said they were still concerned about the DMR and TEM appealing the judgement.

“Those people have a lot of money and of course they won’t be happy with the judgement so they might appeal…but we are willing to fight this battle until the end,” Ndovela told GroundUp.

“The situation in Xolobeni has been very very difficult. … We are all family there but now there are divisions. In every family you will find some who are pro-mining and some who are anti-mining. It’s tearing our community apart,” he said.

In a video posted on twitter, Minister of Mineral Resources Gwede Mantashe said that giving the community the right to say yes or no, instead of the “right to be consulted in detail”, was taking away the state’s right to grant mining rights. “I can tell you, if that’s the case, there will be no mining,” said Mantashe.

In a statement, the DMR said it would study the judgment and state its position once done.