Why Woodstock Hospital has become a home for hundreds

“Legal or not, it is home. And it is a lot better than where I come from.” 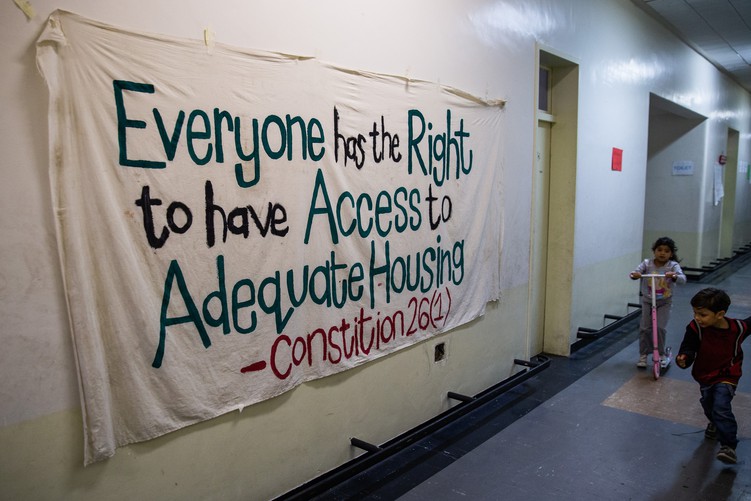 Woodstock Hospital has been unlawfully occupied since March 2017. All photos: Ashraf Hendricks

Two security guards are sitting at the gate of Woodstock Hospital when we visit. This is in stark contrast to the dozens of security guards at Helen Bowden Nursing Home opposite the Waterfront.

Both of these provincially-owned abandoned properties were occupied in March 2017. The occupations were organised by a group called Reclaim the City, which campaigns for affordable housing nearer to Cape Town’s city centre. Although the occupations are unlawful, the province took no steps to evict people at either building. But that’s where the similarities between the two buildings end.

The Woodstock building is much nicer than the Helen Bowden one. The passages are well lit. There is electricity. The toilets flush. There are a lot more taps for people to get water and the building is still in fairly good condition. There are fewer people staying here too — about 50 families at Woodstock as opposed to 100 at Helen Bowden — but that’s likely to change soon. At least one family was waiting to be interviewed to get a place in the building while we were there.

Clothes on a washing line seemed to be the only thing showing the presence of people as we entered the building.

Waiting areas have been turned into family rooms, but some of the rooms are still unoccupied. There are still a few hospital signs on some of the doors. 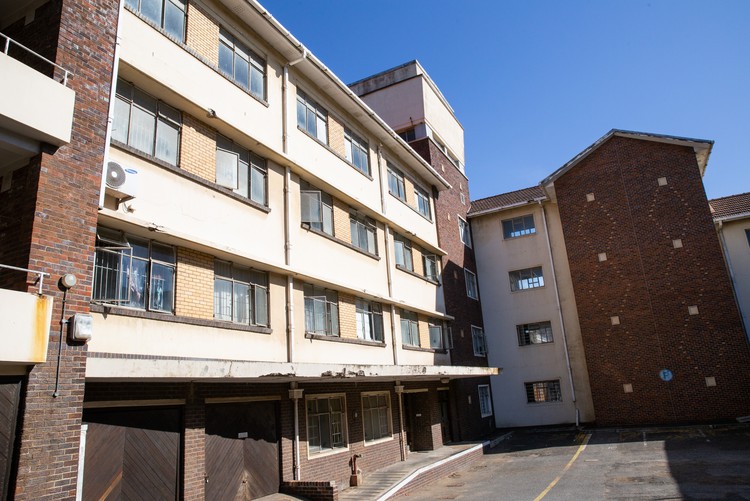 Over 50 families live in the old Woodstock Hospital. More are moving in.

Gadija Kube is 55. She has been staying here for a year. She was evicted from her home a few streets away after being unable to afford to pay the rent. “I stayed there for five years. The rent went from R3,500 to R7,000 [excluding] water and electricity and I was not coping. I could no longer afford it.”

“For two years after being evicted I stayed with friends. It became too much for them. I had to find an alternative place. At the time when I had no place to sleep a friend of mine gave me a flyer about this place. I went and attended some of the meetings and a few days later moved in,” said Kube.

She stays with five children and a grandchild. She has divided the single-room into two. She and her neighbour share a kitchen. She gets a social grant for herself and a child grant for her three children.

“You have to make the most of this place. It is up to you to make it liveable for your family. When you are desperate and have nowhere else to go you make it work. I have made it work.”

She sits with two of her neighbours on a bench on what used to be a waiting area. They are all waiting for the washing machine to finish in the nearby bathroom. 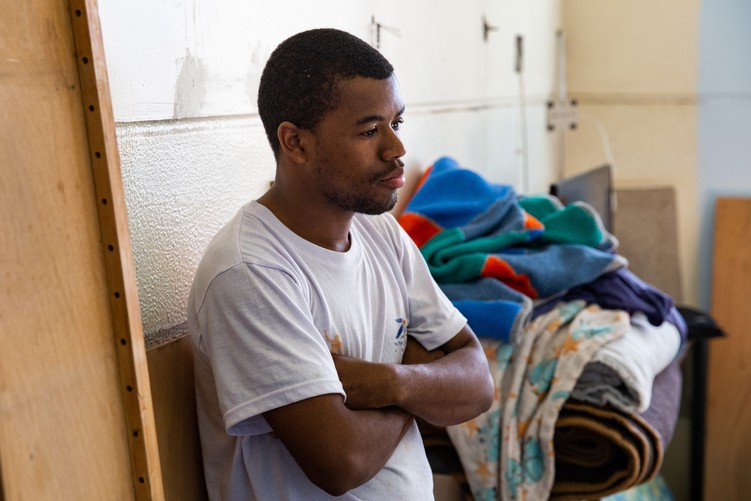 Eddie Visser said, ““This is my home now. Legal or not it is home and it is a lot better than where I am coming from.”.

Eddie Visser, a two-year municipal contract worker, moved from Darling Street to Woodstock Hospital earlier this year after the building he had been staying in caught fire.

“The building was old and belonged to the Department of Public Works. When it caught fire, we knew they were not going to fix it and the best thing for us to do was to find an alternative place to stay, and I did,” said Visser.

He has collected old wooden frames at the hospital to divide his room into two. “This is my home now. Legal or not it is home and it is a lot better than where I am coming from.”

“On my floor I have older people that are looking out for me. I feel safe and I know my belongings are safe,” said Visser.

After he was evicted he went to Wolwerivier, a bleak state-run settlement 25km north of the city where evicted people are offered accommodation.

“I grew up in this area. This is all I know and would not want to move anywhere else. When we went to Wolwerivier it took us almost an hour to get a taxi. That is not life. How would I look for a job in that place?” said Visser.

Vuyo Sakayi is an employee at a nearby supermarket. She is moving in with her husband. Sakayi, originally from East London, has been renting a room in Woodstock for eight years. They were paying R3,500 per month rent before the place was sold to a new owner. “We tried to look for another place but could not find one that we can afford close by. When we heard about this place it was our only hope and luckily we found a room and moved in immediately so we don’t lose it,” said Sakayi.

Her husband Seyi is currently unemployed and is looking for a job.

“We heard that the occupation is illegal but that is the last thing on our minds now. We are just happy we have a place to stay. For us this a chance to be able to go to work, not worrying about how we are going to pay rent at the end of the month,” said Sakayi.

When we arrived, Shanaaz Samodien was hoping she, her husband and two children could move in. She sat on the stairs in front of the interviewee room, first in line. She arrived two hours early to increase her chances. Currently she stays with family members in a two-bedroom house in Woodstock.

“There are too many of us there and my husband and I both don’t have full time jobs and cannot afford to pay rent,” she said. “If we get this then we can have a place of our own and stay with my children in one place.”

“We also tell them that if you come here there are certain rules that you have to follow. For example you cannot vandalise the place. Staying here becomes home for the people … There should be certain control so that it does not become chaotic,” said Chia.