The advertising model is broken: we’re opting out 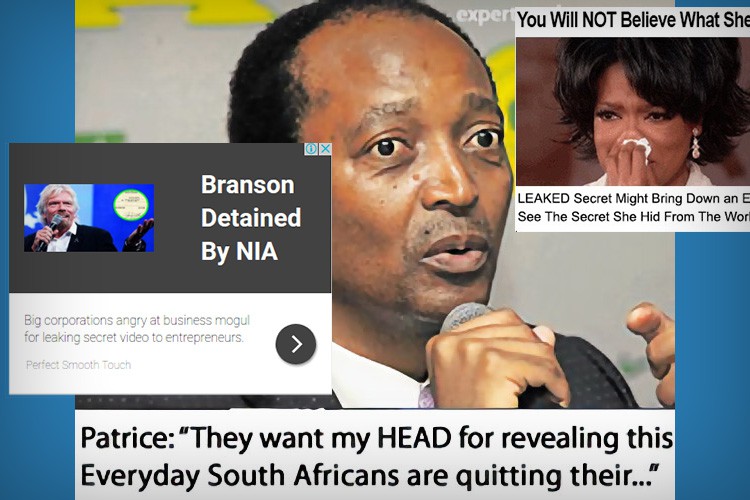 It’s because Google cannot or will not get rid of adverts like this, that we’re dropping Google Ads.

From today, we’re dropping Google adverts from GroundUp. The Google advertising model is broken: not for Google of course, which is massively profitable, but for us, the publishers who have to put up with poor quality, misleading adverts in exchange for small change.

Not too many years ago, newspapers could make real money from advertising. Then along came the Internet, followed by Gumtree, and Google Ads, which with a few minor competitors became the backbone of online advertising. As readers moved to freely available news on the web, so too did advertising revenue.

The Internet has made publications like GroundUp feasible. Because publishing and distribution costs are low for us, we can make our content available at no charge. GroundUp relies mainly on donations, but advertising, we thought, might help.

October was GroundUp’s best month for site traffic (our articles get much more traffic on mainstream media that republish us, but we receive no advertising revenue from this). We had over 320,000 visits to the site from nearly 240,000 users. But we made a paltry R2,754 (less than $200) from Google AdSense (329,000 impressions for AdSense fundis). That does not cover the cost of one feature article.

Google pays a tiny amount each time an ad appears, and a somewhat larger amount if readers click on an ad. To understand exactly how the payment system works requires several PhDs, a four-digit IQ and stay-awake drugs.

But we’d continue to take the small change, which we’re using to build up a little reserve for GroundUp, if it wasn’t for the rubbish which keeps appearing and which we can’t get rid of. For about R20,000 a year, it isn’t worth it to pollute our content with get-rich-quick adverts featuring Patrice Motsepe, Richard Branson and Oprah Winfrey (see image at top of article). We have used Google’s system to “block” the various incarnations of the Motsepe advert from the GroundUp site many times. We have navigated Google’s tortuous online complaint system to write to the company in the hope that a human or artificially intelligent being might take action — to no avail. As someone who in a previous job lodged complaints with the Advertising Standards Authority of South Africa (ASASA) against rotten adverts, I do not want to run bogus ads on a site for which I’m responsible. (And I doubt ASASA could get Google to change its ways.)

Google apparently employs hundreds of people to block dodgy adverts. Either more people are needed, or Google simply doesn’t care enough about the quality of its adverts. Or it’s an impossible task. These dodgy ads continue to appear on some of the world’s biggest news sites, not just small ones like GroundUp. Whichever way you cut it, Google’s system doesn’t work for any publication that cares enough not to mislead its readers.

The final straw came when a few days ago we received a warning notice from Google that we’d violated its policies because we run adverts in our new photo gallery with this image:

So Google accepts get-rich-quick ads featuring famous people without their permission, but will not let us run those adverts on a page with a photograph of nudity, even if it depicts news in the public interest. The insane hypocrisy and irony of it!

Perhaps at some point online publishers, in South Africa or internationally, will come together, agree to chuck out Google Ads, and find a new way to solicit advertising from reputable companies that pay properly. Meanwhile, we’re dumping Google Ads.

Obviously the behemoth in Mountain View won’t miss GroundUp, but we take some pride in saying the feeling’s mutual.

Geffen is the GroundUp Editor.