Why is there so much conflict between Abahlali and the state? 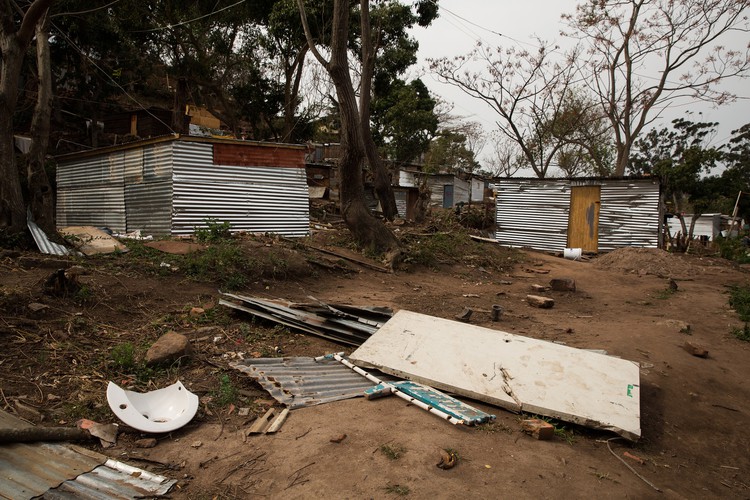 Shack-dwellers in the Durban area who have been campaigning against evictions have been dealt with violently. Photo: Sam Reinders

Across the contested landscape of Durban and the sprawling informal settlements that surround it, Abahlali baseMjondolo and the ANC are locked in a bitter land conflict.

According to Abahlali, the social movement of shack-dwellers fighting for land and against evictions, more than ten of the group’s leaders have been killed since 2013. Some died in running battles with eThekwini’s notoriously violent anti-land invasion unit, others in circumstances that bear all the hallmarks of political hits.

The violence has routinely been linked to local power brokers within the ANC. In 2014, Abahlali activist Thuli Ndlovu was assassinated after speaking out against two ANC councillors in KwaNdengezi who were allocating housing to ANC members from outside the area. Abahlali says this is a common practice across eThekwini Metro. The councillors and a hitman were found guilty of Ndlovu’s murder and handed life sentences in 2016.

Lazola Kati, Right2Know’s provincial organiser in KwaZulu-Natal, explains that the allocation of RDP houses in the province is a highly lucrative industry in an area where networks of political and economic patronage are deeply entrenched and often have close links to organised crime. Abahlali, who have led mass occupations of prime state-owned and private land across Durban, are seen to be standing in the way of such networks.

“We live in communities where local councillors are selling RDP houses meant to benefit the poor and municipalities are illegally evicting shack dwellers and, even more drastically, activists are being killed for standing in the way of those same people,” Kati told GroundUp.

But according to S’bu Zikode, the general secretary of Abahlali, the violence directed at Abahlali also plays into a certain historical ANC narrative in a province that experienced significant political tumult at the end of apartheid.

“A lot of ANC people in the province still have no understanding of the so-called social movements. Any social organising is deemed to be political and therefore seen as a potential threat to those in government. Many of those same people were part of the civil war in KZN and are accustomed to killing people. Somehow our movement became a victim of this history of political violence,” Zikode told GroundUp earlier this year.

Zuma and the Inkatha legacy

For Richard Pithouse, who has written extensively on Abahlali, there is also an ideological aspect to the violence. Ethnic chauvinism also enters the picture. Abahlali members and shack dwellers are often denigrated for not being Zulu (a claim that often isn’t true) and therefore, so the argument goes, not deserving of land or housing in KZN.

“Things really changed with the campaign around Zuma,” Pithouse told GroundUp. “There was a very rapid shift in the political discourse and attitudes. Zuma helped to absorb a large part of Inkatha into the ANC. [As a result], the kind of nationalistic, chauvinistic language that Inkatha was using in the eighties is now being used by the ANC.”

Since Cyril Ramaphosa was sworn in as president in February this year, he and police minister Bheki Cele have repeatedly vowed to stop the scourge of political violence in KwaZulu-Natal, but the threats against Abahlali members have persisted and, the group says, intensified.

Abahlali activist S’fiso Ngcobo was assassinated metres from his home in May this year, while Zikode had to go into hiding in July, with Abahlali claiming in a subsequent press release that he’d been “in imminent danger of assassination.” Other leaders have expressed similar concern for their own safety.

Ndabo Mzimela is Abahlali’s branch chairperson in the informal settlement of Cato Crest, where three of the group’s members were killed in 2013, one by a police officer and two by hitmen. He says that the the plight of urban shack dwellers in KZN is still being ignored by the government, despite Abahlali’s ever-expanding membership and the growing clamour for urgent urban land reform.

In Durban alone, there are more than 317,000 households living in informal settlements, while the eThekwini Metro’s housing backlog is estimated at more than 400,000. According to a 2016 report by People’s Environmental Planning (PEP), an NPO that supports communities living in informal settlements, there are an estimated 12 million people without proper housing across South Africa.

Mzimela has lived in Cato Crest for almost five years. He moved there after he was evicted from a backyard on an adjacent hillside to make way for RDP houses. He and other residents claim those RDP houses were then allocated exclusively to paying ANC members.

Mzimela doubts the ANC’s ability to meaningfully address land restitution in KZN. “The policies that are being made are not actually supporting the poor,” Mzimela told GroundUp. “People in government are mainly talking about agricultural land for commercial benefit, but for us, land is about survival.”

Mzimela added that the ANC’s current move to expropriate agricultural land from white farmers without compensation is merely intended to help secure poor black votes ahead of next year’s much-anticipated general elections.

Land reform expert Dr Ruth Hall believes the current land reform debate playing out in Parliament is also too narrowly focussed on whether or not the Constitution should be amended to allow expropriation without compensation.

“It is not focussing on how the constitution should be amended, nor is it focussing on who should get land, where and for what purpose,” Hall said.

However, Hall and other land experts have expressed hope that putting land questions front and centre of political debate will push the ANC to take more decisive action to make land available to poor people in urban areas.

”I think that the ANC has recognized that for two decades it was able to tolerate failure in land reform and that was politically acceptable. And it no longer is,” Hall says.

Responding to questions in the National Assembly in late August, President Cyril Ramaphosa said that urban land held privately for speculative purposes or lying fallow should be released for housing. “Quite a bit [of land] is owned by state-owned enterprises and some by various government departments. Those must be identified, serviced and released to our people,” Ramaphosa added. In KwaZulu-Natal, as much as 50% of land is owned by the state or the Ingonyama Trust.

But Abahlali leaders say Ramaphosa’s statements stand in stark contrast to the reality they have faced on the ground since the group’s inception in 2005 in response to the private sale of a section of municipal land long earmarked for housing for local shack dwellers.

“The government will always try to crush our processes and our organisation. They can change the administration, change the policies, but that won’t change our situation. In the end, grassroots land expropriation, communal land expropriation is the only way things will change,” said Mzimela.

Hall points out an irony, “At the same time as the state is wanting stronger powers to expropriate without compensation, it is actually the state that is the actor largely involved with evicting people in urban areas.”

Nelly Nyanisa, ANC chief whip in KZN, told GroundUp the municipality wants to forge relationships with organisations like Abahlali, but that the group’s actions often stand in the way of government plans to develop land for housing. “Land meant to improve communities is often illegally occupied, then we can no longer build any community project to help benefit communities,” she said.

But Abahlali spokesperson Thapelo Mohapi maintains that the ANC in Durban continues to seek to “criminalise” Abahlali rather than engaging with them over how to better implement much-needed urban land reform.

The mayor’s office and the Department of Human Settlements in eThekwini didn’t to respond to requests for comment on this article.

According to Pithouse, as long as the ANC is in power, there is scant hope of any meaningful resolution to the current conflict without significant compromises being made by Abahlali: “As long as Abahlali stays independent of the ANC, they will be repressed in Durban. So the choice is to stay independent and endure repression, or allow the movement to be instrumentalized by the ANC.”

Zikode has repeatedly said that Abahlali must remain independent of any political party, and as the group’s numbers continue to grow (their membership is currently estimated at around 50,000), Hall believes that they could put pressure on the state to “really follow through on a significantly revised and different kind of land reform program.”

But unless eThekwini’s corrupt patronage networks are dismantled and there is some semblance of justice for murdered Abahlali activists, it’s likely that the group will remain deeply sceptical of the state’s ability to bring about meaningful change for South Africa’s shack dwellers.

CORRECTION: The article originally incorrectly said three Abahlali Cato Crest members were killed in 2013 by the Anti-Land Invasion Unit. In fact, one was killed by a police officer and two others were killed by hitmen.