This is why the R300 has been barricaded

Residents vow to continue doing so until their demand is met 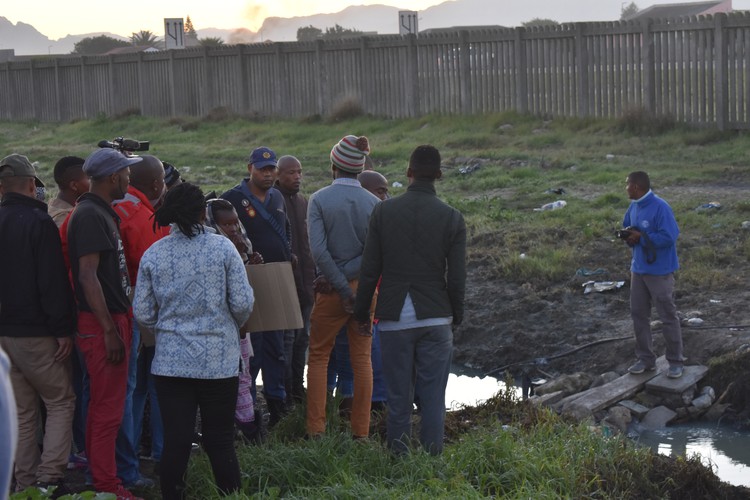 Lower Crossroads residents talk to police about the canal running through their area. Photo: Velani Ludidi

Last week residents of Lower Crossroads in Philippi barricaded the R300 and Jakes Gerwel Road using burning rubble. This prevented access to the N2 from Stock Road. The protesters demonstrated in the morning and then again in the afternoon during peak hours until Friday.

Residents are demanding that the canal through their area be filled in. They want a field for children to play in instead. They say the canal is frequently blocked and they claim it is a health hazard.

Ayanda Gasa said, “The canal invites mosquitos into our houses and we are tired. The protest was the last resort. Our councillor has been reporting the matter … but the municipality ignores us.”

In clashes between the community and law enforcement officials last week, two trucks belonging to the City of Cape Town were torched. Protests have now stopped.

Hlengiwe Sodolophu said, “There is a leaking pipe now that sends sewage to the canal and we will get sick.” He said children often play close to the canal. “Children want to experiment and we will not always be looking out for them. This issue must be addressed.”

Mayco Member for Water and Waste Xanthea Limberg said, “The only recent sewer overflows that have occurred in Lower Crossroads were when the Philippi East Phase 4.1 pump station broke down because of rags that had been flushed down toilets … Rags that have accumulated in the sewer pipeline, while the pump station was down, flood the pumps and again cause them to trip. This gives the impression that the blockage has not been cleared.”

She said the sewer overflows caused by blockages and pump station failures run into the stormwater drains which discharge into the canals. “Making matters worse is that the amount of litter thrown into the canal stops the water from flowing and causes it to stagnate.”

“The City attends to failures when they occur but the power is ultimately in the hands of the public, who will enjoy clean and smooth running infrastructure if it is not abused,” said Limberg.