Why didn’t police stop looting of immigrant shops in Dunoon? 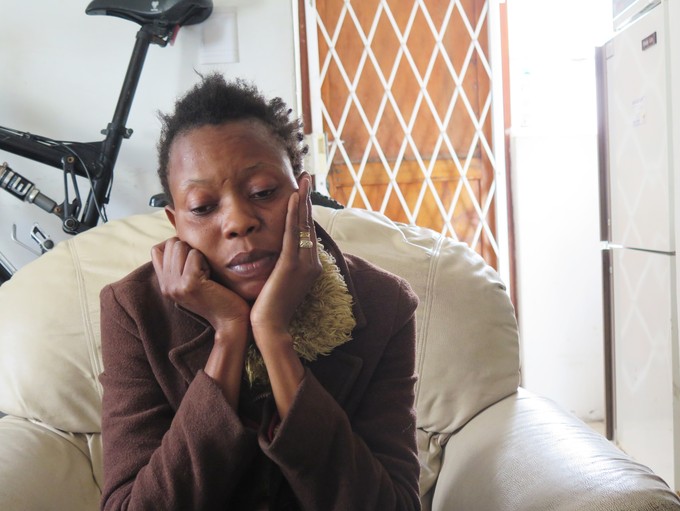 Longo Monzoto doesn’t know how she will pay rent this month after losing everything in her shop in Dunoon. Photo: Ashleigh Furlong

By Ashleigh Furlong and Barbara Maregele

Two weeks ago Longo Monzoto ran a hair salon in Dunoon with two other women. This enabled her to live in a small but comfortable house in Phoenix, Milnerton with her husband. On the night of Sunday 17 April Monzoto’s livelihood was destroyed when protesters in Dunoon looted her shop as well as numerous other immigrant-owned shops.

When 35-year-old Monzoto, who is Congolese, left her shop in Dunoon on 17 April at 5 pm she said that Dunoon was “very quiet, we didn’t suspect anything”. Later that evening, one of Monzoto’s friends, who lives in Dunoon, phoned to tell her that there was a large crowd wanting to break into her shop but that they couldn’t break down the door.

“I was praying here [in Phoenix]. At midnight, [my friend] called me. They [had managed to] open. They took everything,” said Monzoto.

When she got to Dunoon on the Monday morning she saw her empty container.

“The time I see my container I felt like crying, but I say no, God protect me. It was terrible. I didn’t [manage to] take anything. Everything was already gone,” said Monzoto who believes that she has lost about R20,000 worth of stock and equipment.

“I was surviving through my business, but now everything is gone,” she said.

She said that the police were not inside Dunoon on the night of the lootings.

“The police will never come into Dunoon. They can’t do anything,” she said, “They [only] take care of South Africans, not foreigners.”

Monzoto learnt to braid hair when she lived in Lubumbashi in the DRC. She had moved there from Kisangani following the death of her father who was a soldier killed in combat.

“When they killed my father, my mother ran to Tanzania because it was war at that time,” she explained.

As one of 11 children, the family split up following her mother’s desertion and Monzoto was taken in by a family friend.

When Monzoto was about 18 her caretaker died and she was left to fend for herself.

Monzoto didn’t have a fixed place to live in Lubumbashi, and had no family there. Her boyfriend at the time, who was also physically abusive towards her, was a truck driver who travelled between Lubumbashi and Zambia. In 2006 Monzoto decided to join him on one of his trips, but when she got to Zambia she left him and paid another truck driver to let her travel with him to Johannesburg. “In Lubumbashi I was suffering a lot,” she said.

From Johannesburg she travelled to Durban, where she began working in a hair salon earning about R600 a month and working 12 hour days. Eventually, she made her way to Cape Town where upon her arrival at the central station she met a Congolese hairdresser, who let Monzoto sleep on her kitchen floor for three months until she found a place of her own.

In Cape Town Monzoto worked as a hairdresser and eventually in 2010 she set up a shop with two other women in Dunoon.

“Dunoon is not safe. The people who stay there don’t like us foreigners,” said Monzoto. She said that residents sometimes swear at the immigrants and call them “kwere kwere” – a derogatory term for immigrants.

Monzoto said that she has worked hard for what she has.

“In Congo there is no house for free, everything is money. If you need house you have to work hard to pay [for the] land and to build [a house],” she said.

Lidia Mankele says she has been left destitute after her hair and nail salon in Dunoon was stripped of all her products and furniture.

“I have nothing. No money for food or transport for my children to school. I paid my rent from the money I earned at that shop. I lost everything,” Mankele said.

The 34-year-old Congolese woman lives in a small flat in Parklands with her three children aged nine, five and eight-months. Mankele said she moved to Cape Town in 2008 to escape the ongoing war in Congo. She invested her life’s savings and opened a hair salon in Dunoon. A few months later, violence erupted against immigrants in the community. Mankele says she was beaten by locals and her shop was looted.

“I’m still traumatised about it. I moved out of Dunoon after that happened. And now it happened again. It took most of us a year before we opened up our shops there, but I don’t know how we will do it again,” she said.

Mankele became emotional as she described seeing her store after it had been looted for a second time.

“Two weeks ago, some of the community members came around to the shops to warn us not to open, so we didn’t. At 9:30 pm on 17 April we got a call to tell us that our shop was being targeted,” she said.

She says the police told her, “to run for our lives.”

“One police officer told me that if the people see us near our shops, they will kill us. Some people were sitting on the floor, crying because they lost everything they had. What could we do?”

“After the last time I really struggled. I went to clean houses and do washing for people so I could get money for rent and food. Where must I get money to buy my things again? It’s almost the end of the month now and my rent is due.

“I don’t know how I’m going to pay my children’s school transport or buy food for the rest of the month. I will have to go around asking people to give me bread so the children can eat. I can’t even buy nappies for my baby,” she said.

“Even if we wanted to go back, we have nothing to work with. It took me years to get all my things back again. We don’t know how we are going to cope,” she said.

“The people clearly don’t want us there”

“People lost everything. They broke the mirrors, stole the heavy couches and chairs, all the hair pieces and the sewing machines. … Everything was destroyed. The people clearly don’t want us there. There is not safety for us if we go back.”

“The people started breaking into the shops at 8 pm and the police only went in to stop them at 5 am. By that time it was too late and everyone’s things were gone.”

“The police were standing on the bridge, outside the community. How must we feel safe if the police don’t even want to protect us? The police shouldn’t just protect South Africans. It’s like they don’t care about us. When we went to Ipid in Bellville to complain about this, they said that because the police didn’t beat us or hurt us that there was nothing they could do about it.”

Where were the police during the looting?

Both Saps and the Metro Police have a duty to protect people and property.

Both Saps and Metro Police contradict the immigrants’ assertion that the police were not in Dunoon on the night of the lootings.

The City’s Acting Executive Director for Safety and Security, Wayne Le Roux, also told GroundUp that the Metro Police “did have a presence in Dunoon on Sunday evening”.

“As soon as officers became aware of shops being targeted, they called for reinforcements and responded to the situation,” he said.

Despite the police’s statements, the widespread damage to immigrant’s shops is evidence that the police were unable to protect their property, even if they were indeed inside Dunoon.