Where do the children play? Lavender Hill’s derelict facilities 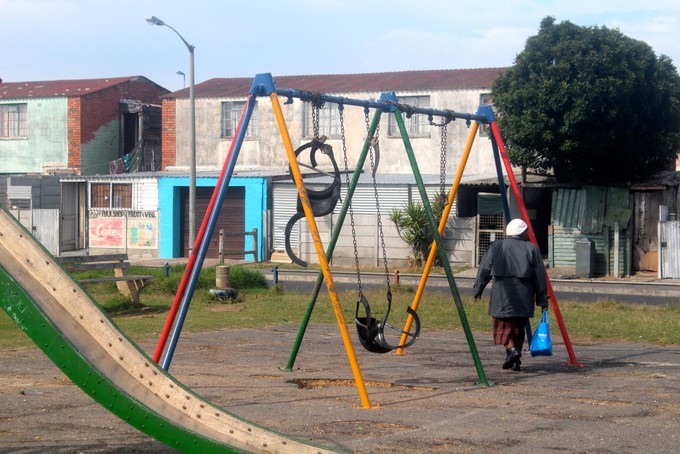 Lavender Hill has youth facilities but they are in a poor state and many go unused.

Lavender Hill residents are calling on the City of Cape Town to upgrade their council-owned flats and create new facilities for youth in the area. They believe this will create “community pride” and help eradicate gangsterism.

“We are requesting the redevelopment of Lavender Hill as a way to combat gangsterism and to create jobs in the area. We want the kids to be proud of where they live,” says Charles Daniels, chairman of the Lavender Hill Civic Association.

It’s mid-morning on 14 April and the community appears to be quiet. Three young men peer through a broken window on the top floor of a derelict block of flats in Blode Street.

“These blocks haven’t been upgraded in over 20 years. At most of the flats, the staircases are falling apart, the windows are broken, there are no gutters and it just looks bad,” Daniels says.

The City is building new RDP houses in a development residents call Cuba Heights. The City’s Mayoral Committee member for Human Settlements Benedicta van Minnen says that 192 of 225 units have been built, and the project will be completed in August.

These new homes are subsidised but because of high unemployment, many in desperate need of housing don’t qualify because they don’t earn enough to pay the monthly bond.

Lavender Hill, according to Mayco Member Belinda Walker, has 13 community parks, a sport complex that includes four soccer fields, two netball and two basketball courts, as well as a cricket field and a rugby field.

But the parks and sportsgrounds in the neighbourhood are in a poor state. At the Arundel Court Park shards of glass could be seen on the floor, the swings were broken and the slide railings cracked.

“There isn’t even proper parks for the children to play or sports grounds for the older kids to use,” Daniels says.

Pointing to the large field off Blode Street known as “the battle field”, Daniels says the open land was once used to play soccer and other sports, but has since become a hotspot for drug trade and gang turf wars.

“No one uses this field anymore because innocent people have been killed just walking over this field to the shop on the other side. Even the clinic nearby has bulletproof windows,” he says.

As for the sports complex, Daniels says that although the City spent R2 million on it, it is difficult for people who live on one part of Lavender Hill to get there because they fear getting attacked by gangsters. “Even if you are not a gang member, the gangsters on that side won’t allow people from this side to walk through their turf to the field,” he says.

Resident Hendrina Goliath, who lives near the Arundel Court park in Depsiton Crescent, says that there’s nothing to motivate the youth in the community.

“Many [mothers’] only income is the R330 from child support grants. People still need to buy clothes and food and pay rent from that amount. What can the youngsters do? There is nothing to motivate them here,” she says.

Goliath says she has seen gangsters use the park near her home to watch people walk to the shop, so they can rob them. “The things in this park are broken because of that. They often use this park as a getaway because it’s easy to run across here and the police vans often lose them through here,” she says.

“The City needs to put up fencing around the parks and fields just like they have in the rich communities,” she suggests.

Goliath says she pays over R300 per month in rent for her one-bedroom unit. “We don’t want to pay rent anymore because the councillor won’t even live in these flats. There is no gutter on my flat so when it rains, my place gets flooded.”

Van Minnen, explaining why further development will be difficult, says most of the vacant land in the immediate vicinity has been occupied by people who live in the backyards of other people’s homes and people living in informal settlements.

Van Minnen says that Lavender Hill has not been earmarked for the City’s Community Residential Unit Upgrade Programme. Instead, “Day-to-day maintenance repairs are carried out,” she says.

But local ward councillor Marita Petersen says that a motion has been proposed for pieces of land to be developed in the future.

The population of Lavender Hill, Seawinds and Vrygrond was 32,600 according to the 2011 census. There were 6,500 households. The vast majority of the population was classified coloured under apartheid.

Fewer than one in five residents older than 20 have at least a matric.

More than half the residents have a monthly income of R3,200 or less.

There were 43 murders reported at the Steenberg Police Station in 2015. This encompasses several areas, including Lavender Hill. By our calculation the murder rate in the areas served by this station is approximately 60 per 100,000, which is much higher than the national average of between 30 to 40 per 100,000.