“What is the use of voting while we are still suffering”

Pietermaritzburg residents say they were promised houses years ago 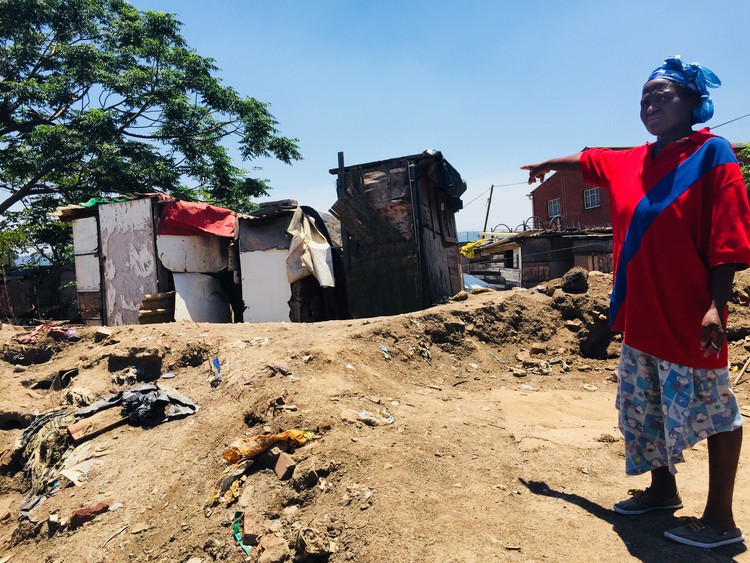 Hlengiwe Shezi has been living in Woodstock informal settlement in Mountain Rise, Pietermaritzburg for several years. She is among residents who are calling on the government to fulfil its promise to build them houses. Photo: Nompendulo Ngubane

Residents of Woodstock informal settlement in Pietermaritzburg say they have been abandoned by the local government which promised them houses years ago.

“Big empty promises were made in the name of getting our votes. We are now aware of their strategy and we will never fall for it again,” said resident Thandeka Qayisa. She has been living in Mountain Rise for years in the hope of one day receiving her own house.

There are over 160 people living in the informal settlement, most of whom come from different areas including Greytown, Kranskop, Matatiele, Mzimkhulu and Lesotho. Most of the homes are made with mud, zinc sheets, plastic and wood. Residents share one communal tap and use pit toilets that frequently are blocked and overflow when it rains. The area is also infested with rats and snakes.

“We have been abandoned for seven years. Where are the houses we were promised?” said Qayisa as she recalled a sod-turning event held in the nearby suburb of Hollingwood in 2012. Residents claim they were told that they would benefit from the housing project, but their houses were never built.

“We have no electricity and use candles and fire to cook. The previous ward councillor promised us better homes. The toilets were dug by the residents. They are made of plastic but is not deep enough so human waste [overflows] inside our houses when it rains. Water comes from underneath and ruins our belongings,” said Qayisa.

She said the only time people living in informal settlements are noticed by politicians is during election campaigns.

Another resident, Hlengiwe Shezi, said that residents wanted temporary homes. Shezi was bitten by a snake on her leg in her room. “The whole area has big rodents. They eat our food from the containers. We fear that they might hurt our children,” she said. “In 2021 they will come here with their big cars asking for our votes. What is the use of voting while we are still suffering?” said Shezi.

Ward councillor Sandile Dlamini told GroundUp that residents of Woodstock were “not forgotten”. He said he had been fighting for this group to get housing since before taking office.

KwaZulu-Natal Department of Human Settlements spokesperson Mbulelo Baloyi said that the housing project that was to be built in 2012 did not go ahead after a site assessment found that the proposed land would not be suitable for housing.

Baloyi added that other housing projects were in the pipeline for Ward 35 which included surrounding Hollingwood communities. He said at least 700 homes would be built in the vicinity of the Woodstock informal settlement and a further 900 in the Hollingwood area. This was subject to an Environmental Impact Assessment due September 2020 and “if there are no objections”, he said.