When can the police detain you for not showing documents?

Many immigrants are detained arbitrarily 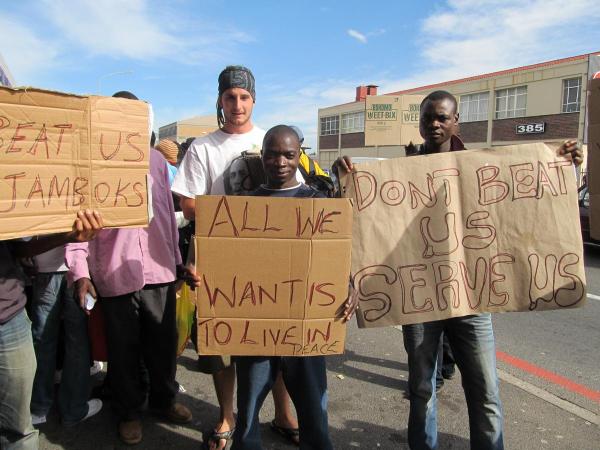 GroundUp has been reporting for years on the abuse of asylum seekers by officials. The photo is of a demonstration in 2012 outside the Maitland Refugee Reception Centre. Photo: Veronica Washaya

By Prashianne Hansraj and Fundi Moyo

GroundUp recently reported the story of Malawian men who were detained by the police for not having documents showing they were legally in the country. Under what circumstances can the police demand that people show identification proving they are legally in the country? We asked Lawyers for Human Rights. Here is an answer from two of their lawyers.

The Immigration Act of 2002 regulates the entry of non-nationals into South Africa, their period of stay and the activities they may undertake. It covers the issuance of work visas, study visas, business visas and tourist visas. Every non-national who wishes to enter South Africa must be in possession of a passport and must comply with the requirements of their specific visa.

The only exception is for those who seek refuge from war in their country of origin or political, religious, racial and other forms of persecution. These individuals are governed under the Refugees Act which spells out the procedure for seeking asylum.

Asylum seekers are allowed to enter the country without any documentation, provided they report without delay to a refugee reception office.

Section 41 of the Immigration Act requires every person who is approached “on reasonable grounds” by a police or immigration officer to identify themselves as either a citizen, or a temporary or permanent resident. If the officer is not satisfied that the person is lawfully within the country, they may be detained for up to 48 hours while an investigation into their status is conducted.

Undocumented people and those who do not have a visa or who have allowed their visa to expire are considered “illegal foreigners” under the Immigration Act. They are subject to arrest and detention for the purposes of deportation.

If a person does not have authorisation to remain in the country and is not an asylum applicant, he or she may be detained for an initial period of 30 days without a warrant, pending deportation. If the person is not removed from the country within the first 30 days, a court may authorise an additional 90 days detention. This authorisation is given without the detainee present and is currently the subject of a High Court challenge. Should the full 120 days pass without the deportation taking place, the Supreme Court of Appeal has made it clear that a detainee must be immediately released, although the deportation process is not necessarily at an end.

Section 41 is problematic in that it requires people to carry an identity document to prove that they are lawfully allowed to be in the country. However, the request for proof must be made “on reasonable grounds”; a police or immigration officer is not allowed to arbitrarily detain someone in the street based on a prohibited ground of discrimination such as their race, religion or language (listed under section 9(3) of the Bill of Rights).

Immigration policing is not in itself illegal or unconstitutional. It must, however, be conducted in a way that complies with the Constitutional prohibition against arbitrariness.

Proper immigration policing may include court-authorised immigration operations based on intelligence or properly constituted roadblocks. In such circumstances, it may be reasonable to ask that a person identify themselves as a citizen, temporary or permanent resident. The immigration regulations indicate the steps a police or immigration officer must undertake to assist an individual to prove their lawful status within the country.

Unfortunately, there are many reports of police officers not following the required procedures during immigration arrests. These reports include accounts of permits being destroyed and individuals not being afforded the opportunity to produce their documentation.

The overstepping of these boundaries set by the Immigration Act and the Constitution, and the arbitrary enforcement of search and detention procedures, is causing fear and mistrust.

Such violations go beyond the infringed rights of individuals; it points to a larger systemic disregard for the values entrenched within the Constitution, values which apply to everyone who lives within the borders of South Africa.