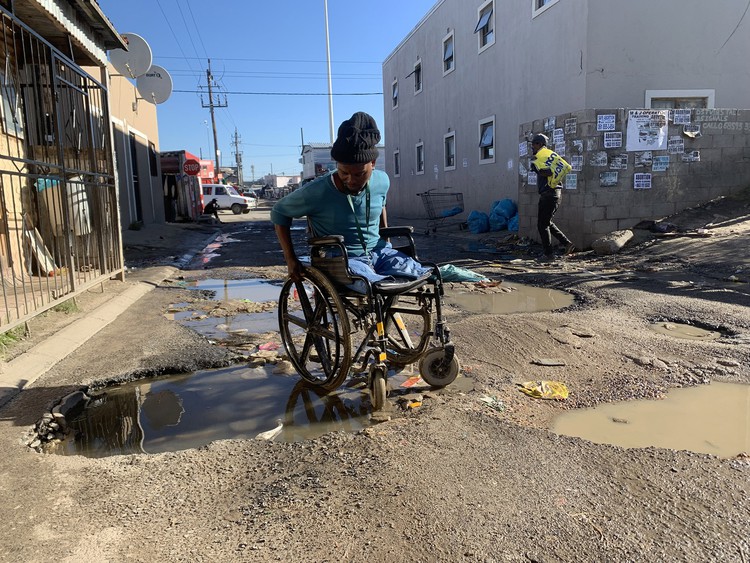 Dunoon resident Baithuti Shasha uses a wheelchair to get around, but he struggles to navigate the streets because they are riddled with potholes and often covered in litter and sewage. But he has no choice. He has daily necessities to attend to, including using the communal toilets, which are also not wheelchair friendly. Because he uses his hands to wheel himself around, he often gets sewage and other debris on his hands.

The shopping centre on Potsdam Road is near to his shack in Ekuphumleni informal settlement, but with the condition of the roads it takes him almost an hour to get there.

Shasha’s legs are amputated above the knees. He survives on a R1,800 monthly disability grant which supports him, his girlfriend, and two children aged eight and ten.

An infection in 2010 left Molebatsi Matshidiso, 69, also with both legs amputated. “Raw sewage is all over, the [wheelchair] tyres. We can’t avoid the sewage. We have to roll through it. I have no children to help push me around,” he said.

Matshidiso said people in the community charge him R130 to push him to the shops or clinic in Dunoon, but he is not always able to afford such a fee.

Mayco Member for Water and Waste Xanthea Limberg said people with disabilities who are unable to use existing communal toilets should contact their ward councillors for the possible provision of an accessible toilet.

Limberg said Dunoon currently has chemical toilets and traditional full flush toilets. “The community has previously rejected offers of portable flush toilets which are particularly useful for people with limited mobility or who don’t wish to walk to a communal facility for safety reasons.”

She said the City is aware of challenges regarding sewage overflowing onto Dunoon streets, and is working to minimise this as far as possible, but it needed the community’s help.

Ward 104 Councillor Lubabalo Makeleni (ANC) acknowledged that people in wheelchairs get stuck in potholes and sometimes fall when there is no cover on sewer manholes.

Makeleni said he has had “endless meetings” with City of Cape Town officials, but they “don’t seem to be bringing any solution”.