What this municipality hadn’t done in years, Gift of the Givers did in just three days

Water quality still has to be tested, but Eastern Cape villages now have boreholes

By Johnnie Isaac and Nombulelo Damba-Hendrik 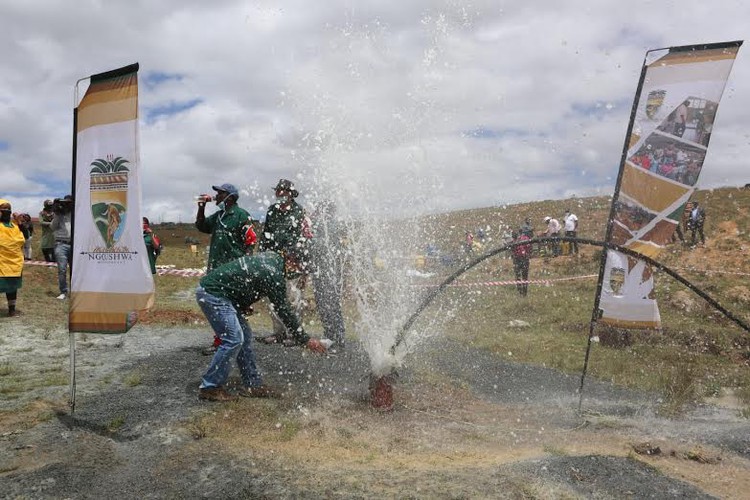 Villagers in Ngqusha in the Eastern Cape have been begging the municipality for clean water for years. It took Gift of the Givers just a few days to drill four boreholes.

Villagers danced with delight when water gushed from the boreholes drilled by Gift of the Givers. Ngqushwa (also known as Peddie) has about 138 villages which have been struggling with water scarcity in the past ten years.

In Feni village, households had to rely on dirty water from the river or to buy water from local trucks. Taps were built in this village but have been dry for nine years.

During the Covid-19 lockdown, young people from this village staged a number of protests, blocking the busy N2, and a road to the local clinic with burning tyres demanding clean water. They threatened not to vote in future if their demand for clean water was not met.

After the protest a water tank was installed for Feni and two other villagers, but the Amathole District Municipality only filled the tank twice a month and three hours later it was empty, residents said. Spokesperson for the municipality Nonceba Madikizela-Vuso said the district was vast and the roads were bad, and tankers constantly needed repair.

Ngqushwa Local Municipality turned to Gift of the Givers for help and last week from Tuesday 24 November to Thursday 27 November, the organisation successfully drilled boreholes in four villages including Feni.

“Within three days after we arrived in Ngqushwa we have successfully drilled four boreholes,” said founder Imtiaz Sooliman. He said they had also offered to clean up four other boreholes which are no longer producing water.

Feni grandmother Nosolomzi Bhudaza said she was very happy. “I’m unemployed and dependent on the child support grant of my grandchildren. I cannot afford to buy water, so this borehole will help people like me to fetch water closer than we used to,” said Bhudaza. 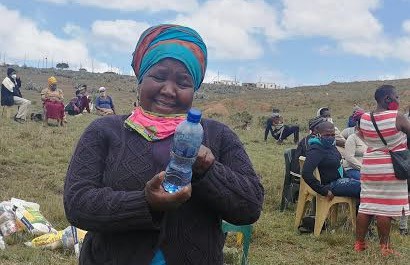 Nosolomzi Bhudaza said she was glad to have water. Photo: Johnnie Isaac

Sipho Majiya, who is disabled and uses crutches, said: “At least now I can go fetch my own water … The river is about 7km away and the road is bad. I had to rely on people for water. The trucks charge R20 for a 25 litre bucket.”

Deputy minister of Human settlements, Water and Sanitation Pam Tshwete was present at the drilling. “Gift of the Givers has drilled boreholes close to where people live. There were taps here that have gone dry. We would like to use these boreholes to supply those taps,” she said.

Asked why Gift of the Givers had been able to drill boreholes when the municipality apparently had not, Madikizela-Vuso said a geohydrologist had visited 30 existing borehole sites, but only seven had been found suitable to be tested. “The ones which were tested yielded water which was not fit for human consumption,” she said. “Owing to issues of water quality, we did not equip any of the boreholes, even those which did have sufficient water.”

“In this regard it should be noted that we have not received water quality results from Gift of the Givers as yet.”

But Sooliman said though the results of tests still had to be received, the indications were that the water was safe for drinking. He said the Gift of the Givers geologist Gideon Groenewald had identified a source of groundwater using the lines of ant hills. These had been used “for ages by our ancestors to find sources of fresh groundwater”. Groenewald had used two drill rigs and had found “a major water-bearing fault zone with a blow yield of at least 120,000 litres per day” at a depth of 21 metres, and within an hour a secondary source yielding about 40,000 litres a day, at a depth of 23 metres.

This proved, said Sooliman, that the aquifers were “high-yielding groundwater resources with the potential to alleviate the water woes of several communities in the Ngqushwa Local Municipality”.

Athini Ngxumza of Fixing Ingqushwa Yethu said people were happy with the intervention of Gift of Givers but much still needed to be done.

“We do not know how many villages are going to benefit from this. Secondly we do not know how these specific villages were selected. And what is sad about this is that Amathole District Municipality is quiet. This is the first step, now Amathole District Municipality should start fixing the pipes, and we can only hope that the water is clean to be used by people,” he said.