Masibambane High has 407 learners in one grade alone 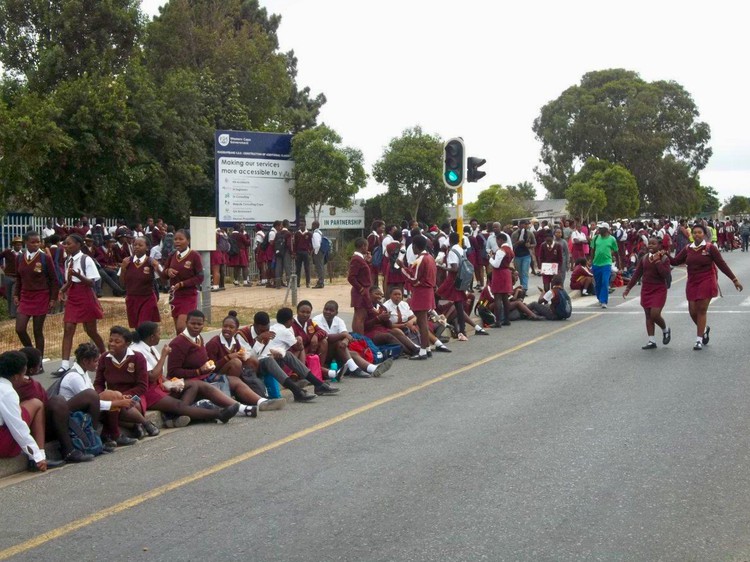 Teachers are battling to cope with their workloads at Masibambane High School in Bloekombos, Kraaifontein.

According to Bronagh Hammond, spokesperson for Western Cape Department of Education (WCED), the school currently has 1,758 learners. There are 407 learners in Grade 9 with eight educators.

The school has 39 classrooms, which can accommodate 1,500 learners. It also has mobile classrooms and science labs, a library and computer labs.

Hammond said approximately 5,000 learners still needed to be placed in schools in the Western Cape.

School principal Rajan Naidoo said the high number of learners forced him “to do the job of two principals.”

“It’s highly stressful and demanding. I deal with double the number of parents and have to do admin work at home,” said Naidoo.

Parents want a new high school to relieve the overcrowding. In January, parents and the community leaders demanded that WCED admit 160 learners on the school’s waiting list and set up temporary classrooms to accommodate them.

Then last week Wednesday, the parents closed down the school, claiming that the department was failing to address their concerns.

Odwa Sisusa said the school had put her son on the waiting list for Grade Eight in November last year. “In January, I was told that my son could not be admitted because the school is full,” she said. “I have no money to hire transport to take him to schools outside Bloekombos.”

Nosango Tini said her son was put on the Grade Eight waiting list in July last year. “Because I don’t have money for a taxi fare or a train ticket, I want my son to study nearby and walk to school … I never went to school and I battle to survive, but I want my kid to study and become somebody.”

Linda Phito, a community leader, said he and other leaders had met WCED officials on the Tuesday, but “they don’t come up with a solution”. He said, “The senior district officials we spoke to referred us to their superiors, saying they have no authority to promise to bring us temporary classrooms.”

Phito said, “The government says that no kids must not attend school. Why are they not accommodating the learners [then]?

Zwelethu Stemela, School Governing Body Chairperson, said, “We want five temporary classrooms to accommodate the surplus learners for now and negotiate with the department regarding construction of a new school while the learners are studying.”

Stemela said most of the learners hoping to be enrolled came from Kraaifontein and a few came from Stellenbosch and Fisantekraal.

Naidoo said the recurring protests were affecting his programme for the school term.

He said he would need more support staff before he admitted more learners to the already overcrowded school. “It’s not only a question of getting more teachers and more classrooms. I will need more cleaners, more caretakers and more admin staff,” he said.