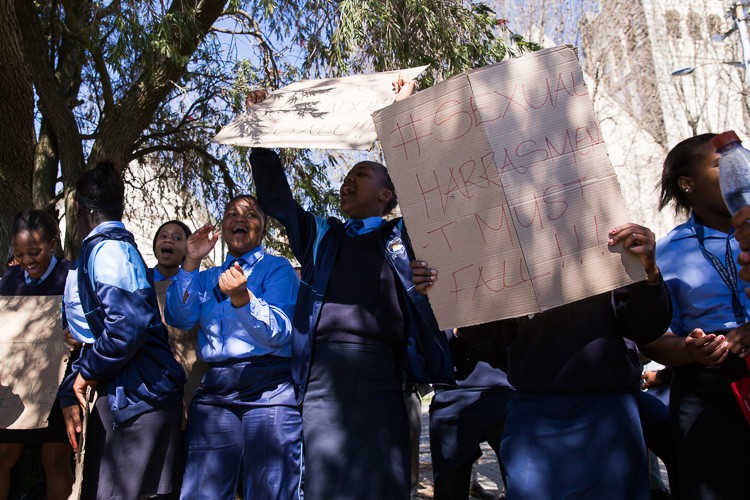 Learners at a Cape Town school protest against an alleged sexual assault by one of their teachers. Archive photo: Ashraf Hendricks

The Western Cape Education Department (WCED) investigated all reported sexual misconduct cases against staff members in the past year. But, the fear of reporting, imperfect investigations and the incomplete screening of new staff members undermines the department’s policy, says a principal at a WCED school.

There were 61 allegations of sexual misconduct brought to the WCED from April 2017 to June 2018: 31 cases of sexual harassment and 30 cases of sexual assault by teachers or other staff against learners.

“Every case reported to the WCED is investigated,” said Bronagh Hammond, spokesperson for the WCED. “The WCED views acts of assault of this kind very seriously.”

The WCED has investigated 56 of the cases, and the other five are ongoing. Of the completed investigations, 22 led to disciplinary hearings: eight for sexual assault and 14 for sexual harassment.

Hammond said that staff who have been dismissed can appeal to the provincial minister, but are not allowed to teach during this process. The dismissed staff member’s name is given to the South African Council for Educators “to ensure that other provinces, or school governing boards, are aware of their dismissal and the reasons”.

Four staff members were given remedial action for sexual harassment in the forms of a final written warning and a fine.

The WCED reformed their protocol for child abuse in schools in 2014. Hammond said that the legislation “highlights the responsibility of educations who may suspect or deal with disclosures of child abuse and sexual offences against children”.

But a principal at a WCED high school says some of these policies are hard to put into practice. (He asked not to be named as the WCED does not allow its employees to speak to the media. If staff do, they can face salary reductions or dismissal.)

According to policy, schools cannot hire a staff member who does not pass the screening or is in some way known to be a danger to learners. This can lead to a ten year sentence or a fine for the people who do the hiring. Hammond said, “The Department has strict processes in place when appointing new permanent employees.”

The WCED carries out the “vetting of new employees at a departmental level, which includes teachers and support staff,” said Hammond. She said it is done “painstakingly”. The WCED uses an external service provider that specialises in background checks. The service provider has direct access to police and court records.

“The service is probably more reliable than that of the Sexual Offenders Registers of the Department of Justice and Social Development,” Hammond said.

The WCED also checks the government’s records to screen for those who have previously worked for the government that were convicted of an offence. Employees must also be registered with the South African Council of Educators.

However, the principal said that the hiring process is flawed. A demand for teachers means that “many schools are only too happy to have a teacher employed in the school”. He said that the hiring process does not include a thorough enough background check. Unless the applicant has been formally charged with a sexual offence through the legal criminal system, a school is unlikely to find out about an applicant’s previous sexual misconduct.

“Someone could be on the [national] sexual offenders registry and still get a certificate,” the principal said. The background check does not include any screening through conventional sex offender registries. This leaves a large hole in the system for sexual offenders to find a job at a school because not all cases go to trial, he said.

“The problem with young people is that they are afraid to testify,” the principal said. “Often these cases never get to court.”

When learners disclose abuse, teachers are legally responsible for reporting the abuse to the authorities. Not doing so is a criminal offence, according to the WCED’s Abuse No More protocol.

A 2014 study by Wits and Cornell universities (which focuses on Gauteng schools) found that both learners and teachers are afraid of reporting sexual abuse in school for fear of retaliation. One teacher interviewed for the study said that she does not report anymore because she “fell out of favour” for speaking out before. Some of the procedures put into place by South African schools may actually create a “culture of silence”.

“Although these provisions seem to provide important support to learner victims of sexual abuse, they might in fact contribute to the relative lack of discussion among educators,” the study found. “Educators may remain silent because they fear incurring liability, do not wish to implicate a colleague in a criminal offence, or are concerned about negative repercussions from school officials.”

The principal said that the investigation process also has issues. Although he has the policy in his office, he has not been formally trained to deal with sexual abuse reports from learners.

Hammond said that the investigations include a protocol to protect learners. Investigators use a two-way mirror so that the victim does not have to see the perpetrator face-to-face. Hammond said that the WCED also provides social workers and school psychologists for victims and witnesses.

“If the perpetrator is deemed a risk to the victim, he or she can be suspended as a precautionary measure, and the employee is prohibited from being at school,” Hammond said.

However, in practice things can be more complicated. A teacher at a school in Mowbray stopped teaching while he was being investigated by the WCED for sexual assault. However, when that investigation concluded he returned to teaching at the school even though he was still facing a criminal trial for sexual assault. The court case was eventually dismissed due to delays by the investigating officer.

Social movement for learners’ rights, Equal Education, told GroundUp it will meet with the MEC of Education Debbie Schäfer to “seek clarity on what measures there are in place to ensure that perpetrators do not have any further contact with children”.

“It is of paramount importance that teachers who are guilty of these offences are unable to remain in their posts, or to remain in the teaching profession,” Equal Education said in a statement on sexual misconduct in school.

GroundUp does not wish to imply in any way that the situation in the WCED is worse or deserving of more scrutiny than other provinces.