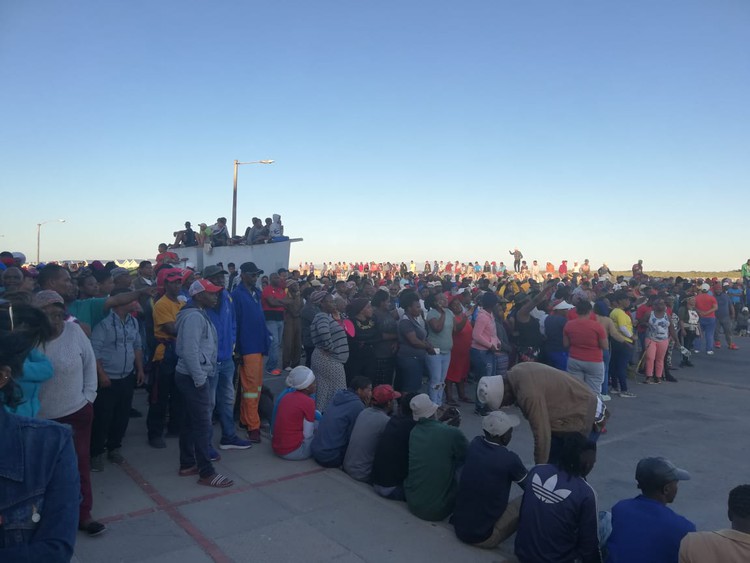 The mayor and residents met Monday night. Later, when the meeting moved to a hall, a brick was thrown through the window. Photo supplied

The small West Coast town of Velddrif was brought to a standstill on Monday as scores of residents took to the streets to protest over the allocation of newly built houses, among other things.

Since early on Monday, groups of protesters blockaded roads with burning tyres and rubbish around the Noordhoek community where the new development is under construction. The R11-million housing project is expected to produce 107 new homes in Noordhoek.

Throughout the day, police and community groups sporadically confronted each other after several of the newly-built homes were vandalised, with doors removed and windows broken.

In a bid to restore calm, officials from the Bergrivier Municipality met the community late last night. But after an hour, the meeting was brought to an abrupt end when a brick was thrown through a window of the community hall. No injuries were reported. It is unclear whether anyone was arrested.

The local soup kitchen building and a nearby shop were also vandalised. The area remained tense on Tuesday.

Resident Ronald January told GroundUp that he had paid a deposit on one of the new RDP houses and was meant to move in two months ago. But on the day the 30 homes were handed over, the municipality withdrew the title deeds from January and several other beneficiaries because it was only discovered at that stage that they did not qualify.

“When we were meant to do the handover of the houses, they [the council] told us that because I didn’t have dependents living with me permanently, we couldn’t get the house anymore,” said January.

“The problem is, there are so many people I know of who moved into their houses who don’t have dependents or a family. This is what we are saying is unfair,” he said.

January said it was the municipality’s responsibility to complete qualification checks before approving his application and accepting his deposit. “We were expecting to move in and then this happened. It’s not right,” he said.

The local housing committee has accused the municipality of excluding them from the process. They said the problem could have been avoided had they been notified when it was discovered that some of the beneficiaries’ offers would be rescinded.

“This has been going on for two months now. The committee has been requesting meetings with the municipality to resolve the issue. But nothing happened. Now people decided to protest,” said activist Jean Japhtas.

“The problem is that national government approved the families that were going to benefit from the housing project. We put the names up at the local library for public comment – as is required. This is when we were informed that seven people, whose names were on the list, did not have dependents, had income of more than R3,500, or didn’t meet one of the other requirements. We couldn’t hand over the houses once we discovered that,” he said.

Van Rooy said he had asked Western Cape MEC for Human Settlements Tertuis Simmers to attend a meeting with the community.