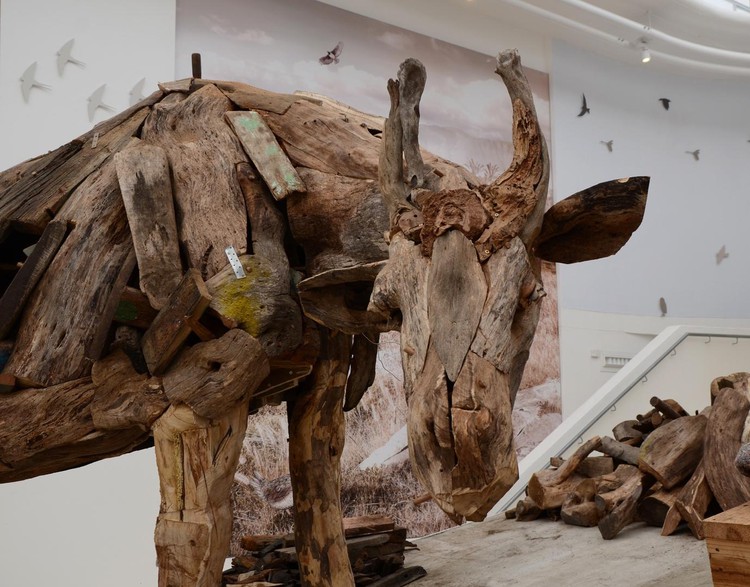 The long extinct Sivathere, a short-legged and long-horned giraffe, is on display at the West Coast Fossil Park. Photo: Roxanne Joseph

The West Coast Fossil Park is one of the biggest recipients of the National Lottery Commission’s funding programme and it recently opened a new museum that focuses on what the area was like millions of years ago.

Five million years ago, long extinct animals like Sivatheres (giraffes) and African bears roamed the dunes of the west coast at Langebaanweg, 150km north of Cape Town. The remains of these forgotten creatures lay buried until miners working on a sulphate mine uncovered some fossils. Now a new museum explores that distant past thanks to a multi-million rand injection of funding from the Lottery.

It is only once you walk out of the fairly nondescript parking lot and step onto the pathway leading to the newly renovated museum, that you can appreciate how the National Lottery Commission (NLC) grants were spent.

Previously, this historically important site had two small structures made of corrugated iron and brick. These housed offices for staff and researchers. It took more than five minutes to walk to the dig site, where the actual fossils lay. But today, you are greeted by an impressive building with glass walls and doors, that looks out onto the dig site, just 250 metres away.

With grants totaling R67 million, the West Coast Fossil Park is the 12th largest beneficiary of the NLC over time, overshadowed mainly by sporting bodies (Sascoc and Athletics South Africa), health (Cancer Association of South Africa) and research-related institutes (Health Systems Trust). The money paid for the planning and development of the museum, the artwork and exhibitions in the centre, an educational programme, transport and staff. The project has been ongoing since 2009, though the centre has existed since 1998.

Langebaanweg has a long and rich history. Fossils dating as far back as five million years and the remains of marine, terrestrial and freshwater animals have all been discovered here over the past 60 years. The types and variety of fossils found gives the place a unique edge, according to park manager, Pippa Haarhoff.

Fossil deposits were uncovered deep down during phosphate mining in the area. Among the first fossils to be found by miners was an ankle bone of an extinct short-necked giraffe, known as the Sivathere. In the exhibition hall at the new centre, life-size models of the animals are being recreated using wood from old shipwrecks.

When the centre was officially launched in September 1998, Iziko Museums of Cape Town and Samancor entered into a public-private relationship. Excavation of fossil deposits resumed on site. It costs two to three million rand a year to maintain the park. It is rare for a museum to get such a modern makeover, but the concept, said Haarhoff, was to give people a better idea of how life has changed over time.

“We would have more reverence [for the world] if we truly understand these changes,” she said. “We wouldn’t trash it.”

The design, enacted by Noero Architects, was created to avoid damaging the fossils and to allow visitors to be able to view the dig site from wherever they stand. Walking through the exhibition hall, which is not yet open to the public, visitors can catch glimpses of the site at specific points. Construction took two years, excluding the planning and design that went into the project.

Despite its historical importance, the centre still has a lot of potential for more research. Haarhoff and her team hope to make that happen. The newly renovated centre offers a range of educational programmes and activities, having been allocated R4 million of the total amount granted. Besides guided tours, visitors can embark on mock digs, make their own fossils and visit the centre’s restaurant and gift shop.

Museums and heritage sites have received approximately R255-million over a period of 16 years from the NLC, with much of that coming from the arts, cultural and national heritage tranche of funding available to organisations. In terms of the NLC’s funding distribution, museums fall under the Arts, Culture, Environment and National Heritage Distributing Agency. Arts currently receives 23% of the budget and allocation depends on the priorities for the year. However, changes to legislation promulgated by the Department of Trade and Industry mean that museums are now disqualified from applying for funding from the Lottery.

But this does not mean that they are on the way out. In fact, quite the opposite, according to Iziko Museums of South Africa’s CEO, Rooksana Omar. In the institution’s most recent annual report she said, “Globally, the role and significant contribution of museums in contemporary society is being foregrounded.” She praised the recognition of museums as “economic drivers generating cultural tourism and employment”. Along with the newly revitalised fossil park is the recently refurbished planetarium and the privately funded Zeitz MOCAA.

Asked about the loss of lottery funding, Iziko’s Director of Advancement and Acting Director of Core Functions, Susan Glanville-Zini, said that the NLC has been an important partner and that the institution would continue moving forward.

“Increasingly, we need to focus more on fundraising and income-generating activities and work more strategically to ensure we subsidise the funds we receive from government.”