Weeks from grant payment deadline, SASSA still has no plan

Call for tenders suddenly goes out 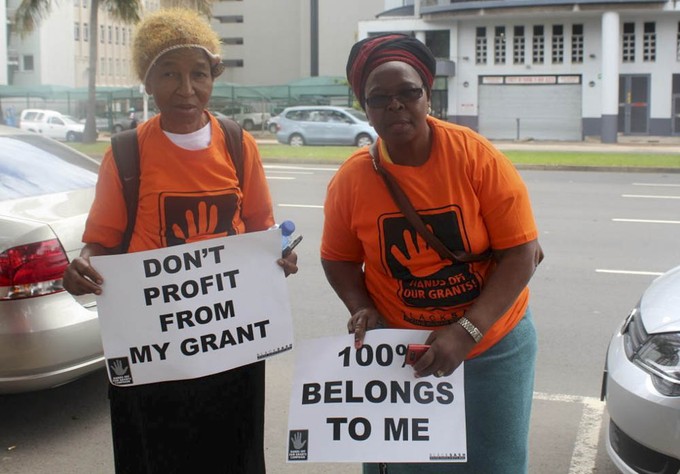 Carol Dlamini and Jeannette Makhanya protesting in October 2016 against deductions from social grants. The current contract with SASSA for the payment of social grants expires at the end of March. Photo: Nomfundo Xolo

A compulsory briefing session was held in Pretoria on Friday 13 January for “service providers” interested in tendering for “the Social Grant Payment and Banking Services”.

South Africa’s 17 million social grants are currently paid over monthly from the National Treasury by Cash Paymaster Services, part of listed company Net1. But in terms of a commitment to the Constitutional Court in 2015, SASSA itself is due to take over payments from the end of March.

Scepticism about SASSA’s ability to take over the complex system has been increased by evasive responses to questions in Parliament from Minister of Social Development Bathabile Dlamini and SASSA officials. The agency has been mired in staffing problems, fraud, failure to curb illegal and unauthorised deductions from social grants by private companies preying on grant recipients, and findings of wasted expenditure by the Auditor General.

The lateness of the approach to possible partners, only 11 weeks from the scheduled handover, will boost speculation that SASSA does not intend to take over payments and that the contract with CPS will simply be rolled over.

SASSA’s invitation to possible partners to issue Requests for Information (RFIs) was published on 9 December, and the closing date for the tender is 10 February, which would leave any new partners less than one month to put systems in place.

DA MP Lindy Wilson, who attended Friday’s briefing session, has no doubt that SASSA is just going through the motions and that the CPS contract will be extended, for two years at least. “SASSA can’t take over the payments in April: it has no bank, no cards, no system. It’s impossible.”

“This is all just a smokescreen,” she said.

In response to a request for comment, SASSA spokesperson Kgomoco Diseko said questions about the handover would be dealt with “in a briefing before month end”.

Net1 CEO Serge Belamant has said he believes the contract will be extended. “We believe that at the end of the day, SASSA may not simply terminate our engagement for what’s planned on 1 April. It might take quite some time before this will actually happen, if at all,” Belamant told shareholders on 3 November.

The company sent out a similar message in a recent report to the US Securities and Exchange Commission for the year ended 30 June. Net1, which is listed on stock exchanges in both South Africa and the US, warned shareholders that the company would lose “a significant portion of our revenues” if SASSA took over the payment system. But, the report noted: “It is possible that SASSA might request us to enter a transition agreement in order to phase out our services”.

Net1 decided in 2015 not to tender again for a social grants payment contract, and rather to shift its focus to the provision of financial products and services “independently of SASSA” through its subsidiaries, including EasyPay.

But the payments contract is hugely lucrative for the company.

This article has been updated to include a brief comment from the SASSA spokesperson.