Over 100 people had to rebuild their shacks 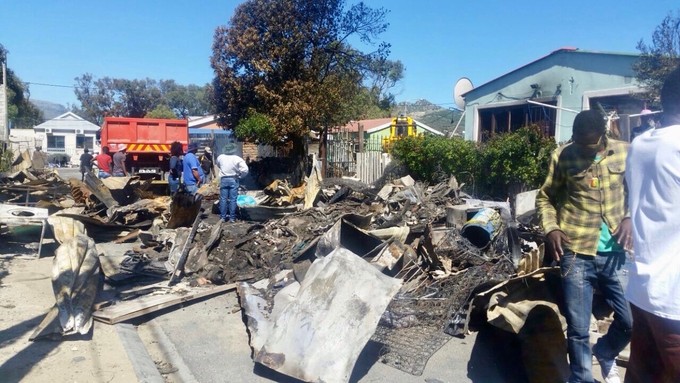 Clean up operations in Masiphumelele after the fire. Photo: Thembela Ntongana.

Over 100 people were left homeless after a fire burned 46 shacks in Masiphumelele in the early hours of Saturday.

The fire started at around 1am according to residents.

Resident Princes Mzunzima says the shack next door to hers, where the fire is believed to have started, belonged to one of her tenants.

When she saw the flames, she ran. “I was just worried about the children. I just wanted them to be safe,” said Mzunzima.

She says her tenant had previously complained about not having electricity.

“We do not know what really happened,” said Mzunzima.

Her tenant disappeared after the fire.

Mzunzima stays in a shack because the RDP house that was built for her five years ago is still not finished. She shares her two-room shack with her five children and husband. The couple is unemployed and survive on the rent from her tenants and on recycling.

In January 2016, she joined a grocery stokvel in the hopes of getting food home to her family in the Eastern Cape.

“I have lost the groceries that I had been looking forward to the whole year and my children’s Christmas clothes. Now, we have to start from scratch. We do not know with what,” said Mzunzima.

A man from Zimbabwe told GroundUp that all he had managed to save from the fire were his papers.

By 7pm on the day of the fire, the City of Cape Town had provided the victims with building material kits.

One of Mzunzima’s neighbours made a shelter for himself out of plastic so he could guard his materials before starting to build on Sunday. Others built through the night, using cars as a source of light.