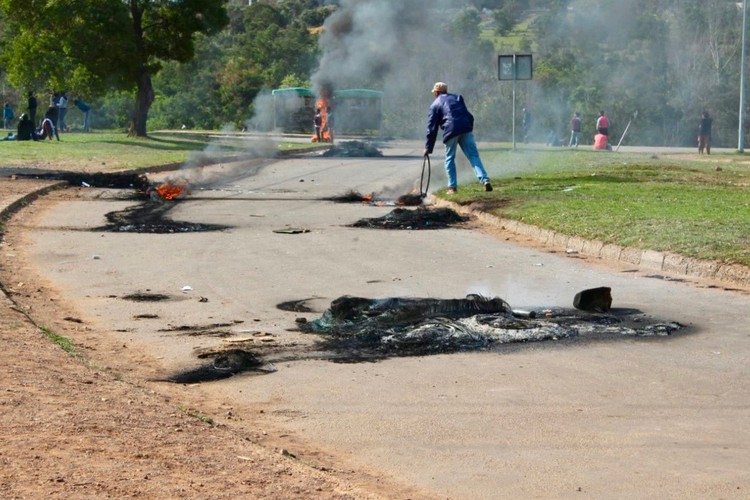 There have been ongoing protests in KwaNomzamo township in Humansdorp, Eastern Cape, since last Thursday. Residents are demanding houses and better services. A police constable was injured, vehicles stoned and municipal buildings damaged. Roads have been barricaded.

Police spokesperson Sergeant Majola Nkohli said a police constable sustained head injuries after she was hit by a stone. She was treated at the Humansdorp Hospital. He said a kilometre of the R330 near Shuku Shukuma informal settlement was damaged by burning tyres.

On Thursday morning, calm had been restored and the road to St Francis Bay reopened. The South African Police Service (SAPS) and Public Order Policing Unit (POP) continue to monitor the situation.

Councillor for ward 6, Velile Vumazonke (ANC), said: “Residents are fed up with the arrogance of the municipality. There was a list of proposed housing beneficiaries compiled by the previous ANC government. When the current [DA] mayor took over the reigns she promised to fulfil the obligations of handing out houses to the deserving beneficiaries. We are surprised that nothing is happening.”

Vumazonke also said residents want recreational facilities and the vandalised community hall to be refurbished. He said an amount of R5.5 million had been set aside for its reconstruction. He wanted to know what had happened to those funds.

Kouga municipality spokesperson Laura-Leigh Randall said, “The last time we had an exact count of the people on the housing waiting list it was approximately 13,000 names. The issue of the R5.5 million meant for the refurbishment of the hall in KwaNomzamo was that a tender was floated out by the municipality and unfortunately there was no positive response from individuals and companies to do the job.”

She said the mayor is willing to address the residents.

Vumazonke said residents waited all day for the mayor at the old community hall. He blamed the police for the protest turning violent on Wednesday, saying people were singing and dancing peacefully when teargas and rubber bullets were unleashed on them.

Kouga’s mayor, Elza van Lingen, said, “We arranged to meet them [residents] at the Humansdorp Country Club … All stakeholders were there to listen and respond to the grievances. However, the protesters chose not to attend the meeting.”

Van Lingen said, “We remain committed to resolving the conflict and are working closely with the ward councillor to address the grievances.”