We live in fear without freedom, say Nyanga residents 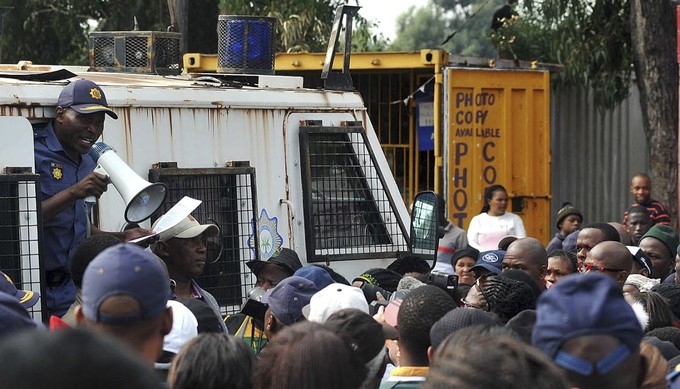 “We, the men, women and children of Nyanga East and surrounding areas are gathered here this morning to express our deepest pain and suffering at being refused our right to citizenship, safety and freedom by a group of gangsters that have caused suffering and misery for our people - poor, rich, young and old and all genders from enjoying our hard earned freedom, equality and dignity,” read Community Policing Forum (CPF) chairperson Martin Makasi from the memorandum when residents gathered in front of the police station.

He said attacks on four residents in the last two weeks had triggered the march.

“Last week an elderly woman in the community was shot dead. After that, two teenagers aged 15 and 17 were killed, and a seven-year-old still lies in hospital. They were at their homes. We decided to march to the police to tell them that what we have been saying, that there is a shortage of police in Nyanga, is true because if they were there these incidents would not have happened,”

“We have been saying the same thing to police for more than seven years, we have even gone to parliament and they keep promising us but nothing ever happens. We want to show them that it is not only the CPF that is complaining but also the residents are feeling the pain,” said Makasi.

Deputy Provincial Commissioner for operational services, Thembisile Patekile, told the crowd a lack of land was preventing the building of a police station in Samora Machel.

“The reason why the police station in Samora Machel has not been built is that there is not land. If there can be land available we will start building,” said Patekile.

In the memorandum the residents called on the SA Police Service (SAPS) to combat gangsterism at Zwelitsha, Mau-Mau, New Crossroads and Gugulethu. They also called for more police visibility, more police officers, and a detailed report on the status of the Samora Machel police station.

Nondumiso Mange, who has lived in Nyanga for more than 30 years, said Nyanga had become one of the most dangerous townships

“You are scared to sleep because you do not know what might happen. You do not know if you going to wake up. They come into our houses and kill us for our belongings just so they can buy drugs. You are never safe. When you go to work in the morning, you know there is a possibility your belongings will be robbed and there is nothing you can do about it.

“It is difficult for us to celebrate this day [Freedom Day] while we as a community live in fear without freedom. Even in our own homes we have become prisoners. Crime in our community is so high you cannot just walk anywhere.”

“The drugs are not only killing the people using them but they are killing the community as a whole. We get robbed and stabbed and some people lose their lives just so an addict can feed his addiction,” said Mange

Another resident, Daluxolo Damane, said: “Residents are sick and tired of the policing in the community. They tell us Nyanga is a murder capital but what are they doing about that? As residents we do not get a lot of support from the police. The recent deaths show that. Only two people have been arrested in all those crimes,” said Damane

He said when people were arrested they were released immediately and often committed the same crimes. Nyanga was too big for one police station, he said.

Some residents were not happy that the Provincial Commissioner Lieutenant General Khombinkosi Elvis Jula was not there to receive their memorandum.

Patekile signed and accepted the memorandum and said SAPS would reply to residents’ demands within seven days.

Concerning the recent murders, he said a team of investigators was working on these and two suspects had been arrested.