Part of Gugulethu canal clogged with rubbish after employment dispute 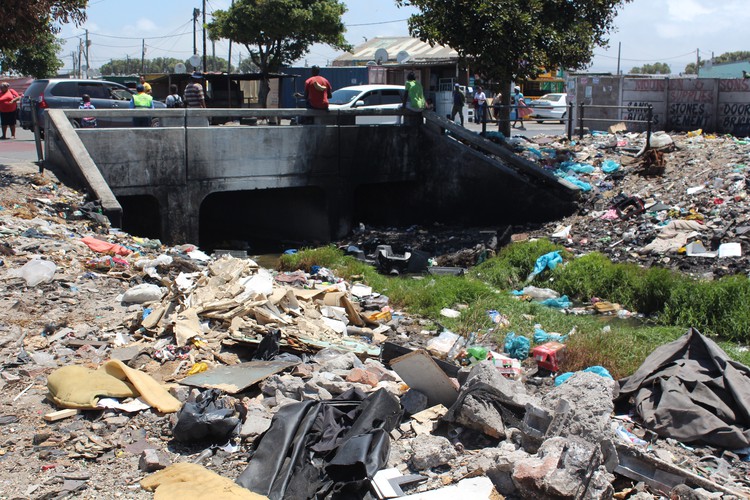 Part of the Lotus River canal in Gugulethu is clogged with rubbish. Photo: Mary-Anne Gontsana

Residents of Ward 42 in Gugulethu in Cape Town say they have become mosquito food after an infestation of insects on the nearby canal, which has not been cleaned for almost a year.

The City of Cape Town says residents have prevented the contractors from cleaning the canal, demanding that local people be employed to do it. Residents have denied this.

The NY3A road crosses the Lotus River Canal. On one side of the road, the canal is clogged with rubbish including duvet covers, nappies and broken television sets. On the other side, the canal is clean, with the water flowing as should.

“It really confuses us why one half of the canal is constantly cleaned, while this one is neglected,” said resident Punkie Sayo, who is also the coordinator of the South African National Civic Organisation (SANCO) in Gugulethu’s Section 2. “We are struggling with mosquitoes and it stinks here.”

“It is really tough here with these mosquitoes, and they are huge ones,” said another resident who identified herself as Amanda. “I make sure that at 6pm all doors and windows in the house are closed. Yes, it’s hot and we sweat like crazy, but it’s better than being attacked by mosquitoes.”

But the City of Cape Town says it is the community that is preventing the cleaning of the canal.

The City’s Mayco Member for Transport, Felicity Purchase, said the City had had a team cleaning the area between July and October 2019. “However, members from the local community prevented the City’s contractor from conducting the cleaning, and demanded that we employ random residents who were unemployed,” she said.

“This is illegal and contravenes the City’s policies and processes, as well as the Municipal Finance Management Act. Also, the City’s Expanded Public Works Programme (EPWP) determines that local labour, be it subcontractors or unemployed people from the local community, be sourced from the local subcouncil database,” said Purchase.

But Sayo denied that the community had ever prevented anyone cleaning the canal. “We would never do that. Just a few days ago, there were people cleaning on the other side of the canal who are not from the area, but did we prevent them from cleaning? No.”

Apart from the filth, Sayo said the pathway next to the canal was a crime hotspot because criminals hid in the bushes. “There are street lights on that pathway, but they do not work, so it is completely dark here at night.”

Phindile Maxiti, the City’s mayoral committee member for energy and climate change, said: “The City’s electricity generation and distribution department has on numerous occasions repaired these street lights which are being repeatedly vandalised.

“The department is now in the process of meeting with the ward councillor and community leaders of the area to discuss measures to encourage the residents to work with the City to take care of the infrastructure. The department also encourages the community to come forward with any information regarding the ongoing vandalism in this vicinity,” said Maxiti.