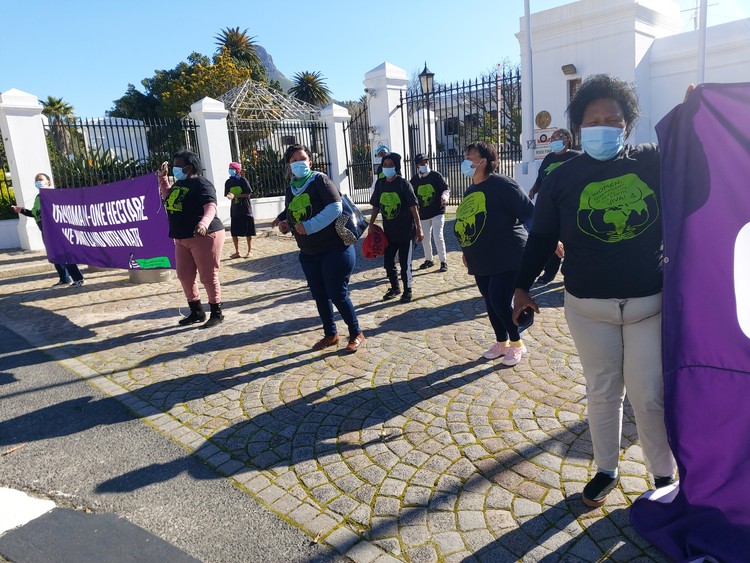 About 25 farm workers in the Western Cape picketed outside Parliament in Cape Town on Tuesday to highlight their ‘One Woman, One Hectare’ campaign for women’s month. Photo: Liezl Human

“If rural women had a hectare of land, we wouldn’t be spending the little that we have to buy food. We could feed our children and communities from our own gardens,” says Margaret Jacobs, a former farm worker from Stellenbosch.

On Tuesday, Jacobs joined about 25 farm workers from the South African Rural Women’s Assembly outside the National Assembly building in Cape Town as part of the ‘One Woman, One Hectare’ campaign for women’s month.

The purpose of the campaign is to urge the government to give rural women access to land to manage on their own. Some women at the picket said getting a hectare of land would help them become economically independent, provide food for their families, and even create employment in their communities.

Joann Johannes, a seasonal farm worker from Simondium, said that since the Covid-19 lockdown, people in her community had been going hungry since many had lost their jobs.

“If we had some land, we could’ve planted our own vegetables and helped our communities to ease the hunger,” she said.

Johannes said that women in the campaign no longer wanted to be dependent on grants like the R350 Covid-19 Social Relief of Distress grant. “We don’t want handouts. We want land, to become economically independent and to ensure that we work the whole year. This land will give us food security,” she said.

The campaign has been going on since 2014. The Department of Agriculture, Land Reform and Rural Development initiated a similar One Household-One Hectare programme in 2016, but some farm worker women said it fell short of their calls.

The Rural Women’s Assembly sent a letter of demand to various departments on 6 August, including the Presidency, and the Departments of Agriculture, and Forestry, Fisheries and Environment. The letter urged the government to meet their demands.

The departments were given 14 days to respond.