Extinction Rebellion calls for the use of solar, wind and tidal power 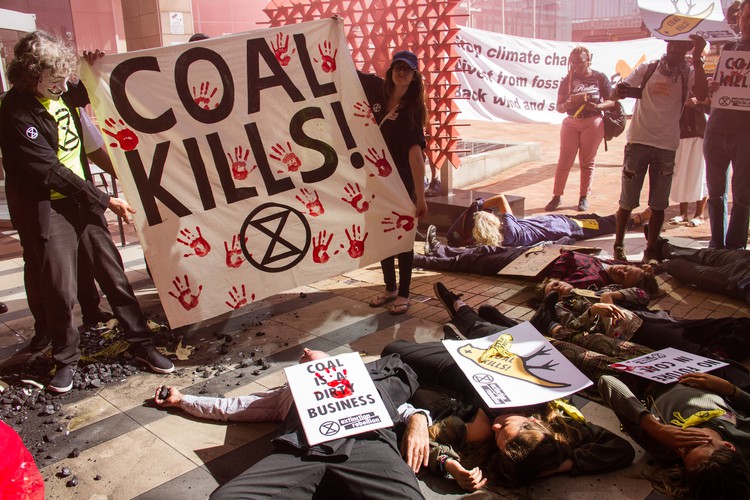 Protesters outside the annual coal conference called for the replacement of coal with wind, solar and tidal energy. Photo: Ashraf Hendricks

About 80 activists took part in an Extinction Rebellion protest outside The Westin hotel in Cape Town during the annual Southern African Coal Conference on Thursday.

Business executives, lobbyists, and government officials gather every year to discuss the future of coal mining, processing and trading at the conference.

The protesters want to encourage the switch from the use of coal to alternative resources of energy. They said coal, gas and oil might once have been useful but were now killing people daily through air pollution and climate change.

Extinction Rebellion member Peter Benjamin said, “South Africa does not need coal for its energy. It is one of the best countries in the world with all the opportunities of solar, wind and tidal power. We respect the miners and the people who work in the power stations. We are against the jobs that are killing and polluting our country, people and the planet. This is about climate change and the ecological crisis.”

“Within 20 to 30 years this is going to be the main issue in the world,” said Benjamin.

Nester Ndebele, a member of Mining Affected Communities United in Action, said mines have had a negative impact on her community. “There are only 20 jobs created in 20 years. Mines have affected a lot of people health wise. Our people have been evicted. They have been displaced in their own community because of investors who invest in mines,” said Ndebele.

The conference continued while people were protesting outside.