“We do not have streets, but during elections you will find big black cars driving between our shacks” 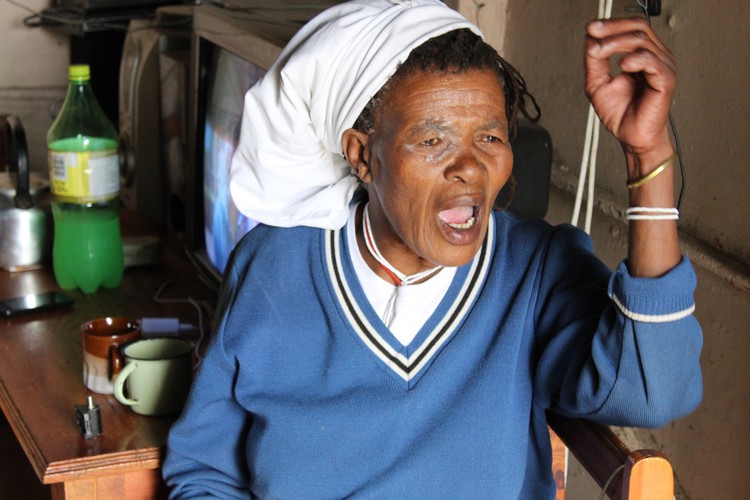 Vuyelwa Mgengqeni fears she will die before she receives a RDP house. Photo: Nombulelo Damba-Hendrik

Vuyelwa Mgengqeni, who is 67, has to cross a railway line to the nearest bushes whenever she wants to relieve herself.

She has been living in a shack for more than 20 years in Zwelibanzi Soga informal settlement in Mdantsane, East London. She says she has lost hope that she will ever receive a RDP house.

Mgengqeni says repeated promises have been made to residents at election time and Buffalo City Mayor Xola Pakati has visited the area in 2016 and 2017 but nothing has changed.

“We do not have streets, but I can tell you during election campaigns you will find big black cars driving between our shacks,” she said.

Mgengqeni said she was one of the people who started the informal settlement in 1992. Today, there close to 400 shacks but only eight toilets. Some residents have built themselves pit toilets. Others, like Mgengqeni, use the bush.

They say not a single resident is registered for RDP houses and the municipality has told them they will not be registered until a housing project has been approved for the area.

When GroundUp visited the settlement, Mgengqeni was crossing the railway line on her way back to the shack she shares with her six children and grandchildren.

“Everyday, I cross this railway line to the bushes to relieve myself. I know it is dangerous but I do not have a choice. Toilets are far from my house and sometimes you will go to the toilet to find people queueing,” said Mgengqeni.

Mgengqeni said four ward councillors had led the area but none had managed to get houses for them.

Electricity was installed in 2017.

“I’m tired of living in this shack, but it looks like I will die here waiting for a house,” she said.

Another resident, Nompumezo Mbali, said she had been living in the settlement since 1993. She has built a pit toilet next to her home, but it is full.

“The toilets supplied by the municipality are very few and are far from most houses,” said Mbali.

“Always when we want to raise our grievances we write a letter to the municipality but we are ignored,” she said.

Ward Councillor Mpumelelo Fini said a land surveyor would be sent soon as part of a process to build houses in the area. But residents were sceptical.

Asked by GroundUp when the surveyor would be sent, Fini told us to send questions to municipal spokesperson Samkelo Ngwenya.

Questions about housing and toilets in the settlement sent to Ngwenya on Monday 11 November were not answered, though he promised to respond by 13 November. On 21 November another spokesperson, Luxole Komani, confirmed that a surveyor would be sent to the area but did not say when.