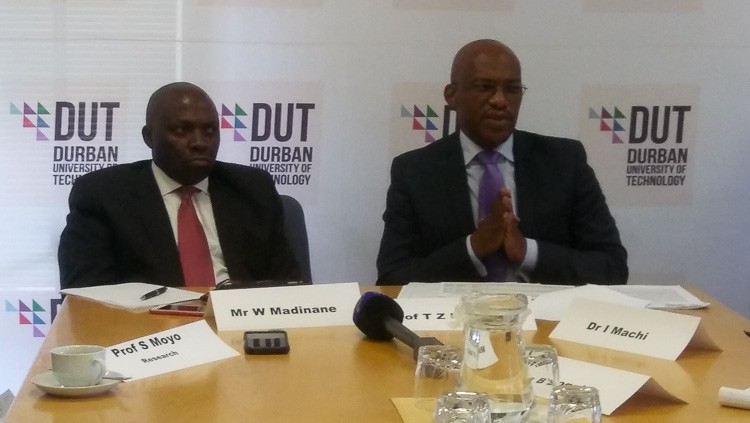 Chairperson of the council of the Durban University of Technology Wiseman Madinane and Vice-Chancellor Thandwa Mthembu said the university was considering bringing in a mediator. Photo: Zimbili Vilakazi

The Durban University of Technology (DUT) is considering bringing in a professional mediator to resolve the salary dispute with three unions which has affected registration at the university since 15 January.

At a media briefing at the university on Thursday, Vice-Chancellor Thandwa Mthembu and council chairperson Wiseman Madinane said meetings had not yielded any results. Staff are demanding a 10% salary increase and the university is offering 5.75%.

Madinane said according to the Department of Higher Education and Training, universities could spend between 58% and 62% of their budget on salaries but the DUT was already spending nearly 70%.

“Even if we had billions we would still need to go back to the mandate given by the department that guides us on how much we can spend on salaries,” said Mthembu.

He said the university was owed R220 million in student debt and also needed an infrastructure revamp of R1.2 billion.

Union representative, Milton Estrice said the staff would continue with their strike because they believed that they were not being treated fairly.

“The management is not willing to come to the table with a team that is dedicated to resolve the impasse,” said Estrice.