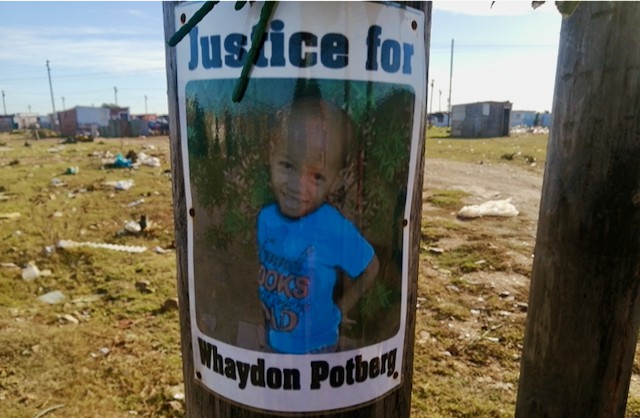 Whaydon Potberg was electrocuted in November in Ocean View, Jeffrey’s Bay, by an illegal electricity connection from this pole. Photo: Mkhuseli Sizani

Kouga Local Municipality has come under fire for delays with the electrification of Ocean View informal settlement in Jeffrey’s Bay, which residents say is costing lives.

After Whaydon’s death, residents say, the municipality removed the illegal connections and promised electrification. But since January, no work has been done, and to date only 150 shacks have received electrical infrastructure, according to Nomathamsanqa Mwilana, a community leader and South African National Civic Organisation secretary.

Part of the work had been done on 50 other shacks, she said. “The electric poles were left with live wires hanging. Due to frustration, the residents have decided to connect from those electric poles illegally. The lines are lying on the ground,” she said.

Mwilana said the settlement was established in 2002 by fire victims from Tyoksville and Ono-R10 informal settlements. There are several thousand shacks in the settlement today.

“The residents are very angry because we cannot keep on burying our children because of the municipality’s failure to give us service delivery,” she said.

Ward 14 Councillor Sindiswa Makasi (ANC) said, “The project has stopped because the municipality has run out of material. But the first 150 that were meant to be finished between November and December were finished … The electrification is done in phases.”

Kouga Municipal spokesperson Monique Basson said she was waiting for the relevant official to respond.