“People are dying and getting injured everyday on this road,” says Cornubia resident 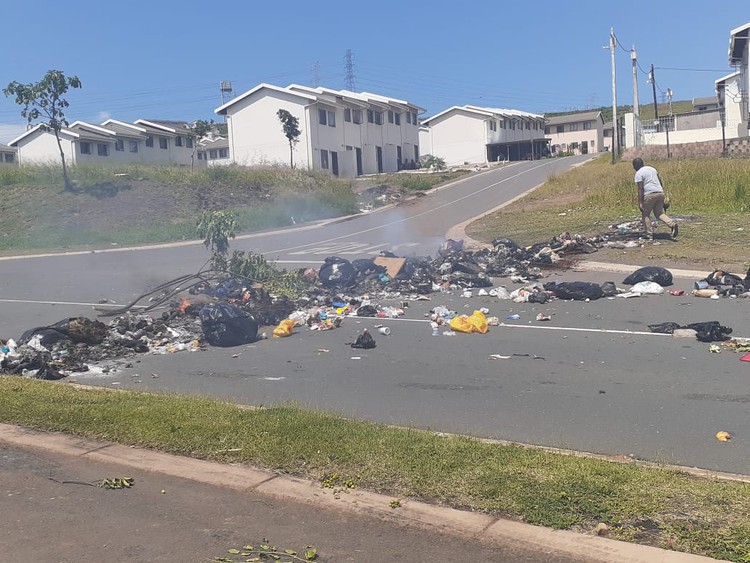 Residents of Cornubia, north of Durban, blocked a section of the R102 Highway on Tuesday and Wednesday, demanding a pedestrian bridge. Photo: Nokulunga Majola

Residents of Cornubia, north of Durban, blocked a section of the R102 highway with burning rubbish on Tuesday and Wednesday, demanding a pedestrian bridge.

Several pedestrians have been knocked down while trying to cross the busy highway. The most recent incident was on Monday, when a pedestrian was knocked over.

Residents say they have been asking the eThekwini Municipality to build the bridge for more than four years.

Resident Patrick Phembela explained that many learners crossed the busy highway because they attend neighbouring schools in Phoenix. “The only way to get across and the shortest route to use is crossing the R102 highway. We have been asking for a bridge for years but the City has not responded to our request. We were promised a bridge but before that, we were promised buses that will help transport school kids. But up to today, neither one has happened,” said Phembela.

Residents say they took to the streets because they feel abandoned by the City. “The community is angry. We are tired of people dying, we are tired of empty promises. The City is taking its time to resolve this matter but people are dying and getting injured everyday on this road,” said resident Sizwe Ndlovu.

EThekwini Municipality spokesperson Msawakhe Mayisela said the City was aware of the community’s concerns. “We have already started the process to engage the province which is responsible for the road. In the meantime, we are exploring several avenues that will be temporary solutions. One of them is to erect a temporary steel pedestrian bridge that will be easy to dismantle in the event of a permanent bridge.”

Mayisela urged residents to stop protesting while the City “elevated these grievances to the top of our agenda”.