“We are tired of being a charity township” Alexandra inquiry told 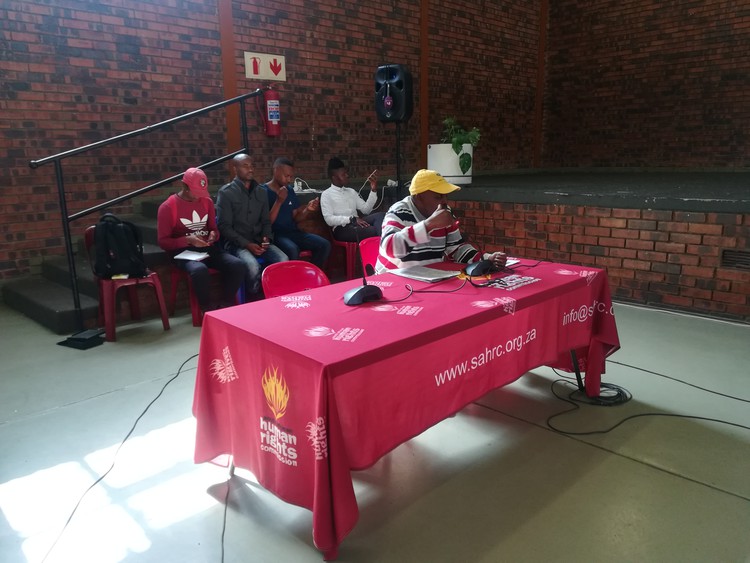 Alexandra resident Abendingo Matu made an oral submission at the inquiry into the recent spate of protests in Alexandra. Photo: Zoë Postman

“We are tired of being a charity township where people come to give us soups and blankets” on Mandela Day, Alexandra resident Sandile Mavundla told the inquiry into Alexandra today.

“We want real and tangible investment in our community,” said Mavundla.

The inquiry, by the South African Human Rights Commission (SAHRC) and the Public Protector’s office, follows a recent spate of protests in Alexandra.

The inquiry started in April but it was postponed half way through the first day because the SAHRC said the City of Johannesburg was not adequately prepared.

The three-day inquiry resumed on Monday at the East Bank Hall in Alexandra.

Its purpose is to consider some of the issues raised during the protests such as the lack of housing, water and sanitation in the township. The inquiry will also look into allegations of corruption in the Alexandra Renewal Project (ARP) - a project initially worth R1.6 billion, launched in 2001 to develop Alexandra.

About 80 community members attended the inquiry and about 12 were to make oral submissions to the panel.

Mavundla, a convener of the recent protests, denied suggestions that the protests — which happened a few weeks before elections — were politically motivated.

“There is nothing that can align the total shutdown to any political party … This was about service delivery, not politics … The ANC councillors came out in numbers to support us because they experience the same thing as we do but they did not take over the shutdown,” he said.

He said the residents were happy that the SAHRC and the Public Protector’s office were in Alexandra “to find a solution that will not take sides but benefit the people of Alex”.

Bobby Solomons, spokesperson of the Total Shut Down movement, told the panel that the protests had started because residents were concerned about the development of their community.

Concerns included the lack of refuse collection, potholes in the roads, illegal land occupations and illegal water and electricity connections which posed a safety hazard.

“When people settle illegally, obviously they have to have access to services and they are not being serviced by council, so they steal water and electricity,” he said.

This put a strain on the service delivery and infrastructure in Alexandra, Solomons told the panel.

Resident Abendingo Matu urged the City of Johannesburg to create jobs in Alexandra by making use of residents for service delivery. “The problem is they give these issues to rich people who don’t know what is happening in Alex. The system needs to change,” he said.

Valeke Mbalukwana, chairperson of the Alexandra Property Owners’ Rights organisation, said City officials, under the Alexandra Renewal Project, had demolished “beautiful houses” so that it could develop those areas in Alexandra.

He said people had been placed in alternative accommodation where they had to start paying rent to property owners and not the City.

Mbalukwana said the organisation had brought this issue to the SAHRC in 2011 but the Commission had never reverted back to the community. “Whatever has been said [in this inquiry] is already in your possession… It might not have reached this stage if it had been dealt with properly in 2011,” he said.

He urged the SAHRC and the Public Protector’s office to do a proper audit of the ARP and find out where the money for development in Alexandra was spent.

The inquiry continues on Tuesday.