“The ANC has fooled us enough. They must deliver” says Pietermaritzburg protester 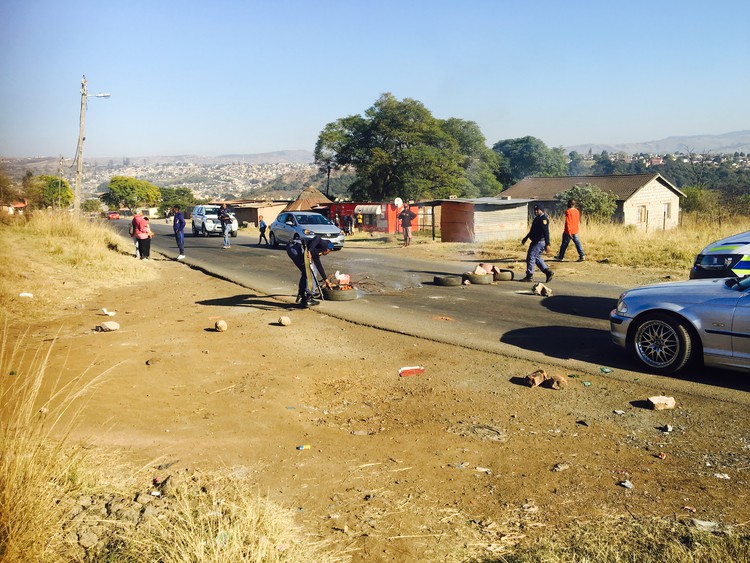 Police clear burning tyres and rubble on Monday after Denmark and Slangspruit residents in Pietermaritzburg took to the streets to demand houses, electricity and toilets. Photo: Nompendulo Ngubane

Residents of Denmark and Slangspruit in Pietermaritzburg blockaded the roads leading to the Imbali township for a second time on Tuesday morning. They are demanding that the municipality provide electricity, toilets and houses.

Streets in the area were littered with burning tyres, shards of broken glass and large stones, causing traffic jams.

On Monday no arrests were made, but police used rubber bullets to disperse the protesting residents.

“We want premier Sihle Zikalala to come and address us himself,” said resident Sboniso Hlongwa. He said they were tired of the Msunduzi Municipality’s empty promises.

This is not the first time residents took to the streets to voice their complaints. In May, hundreds of ward 13 residents shutdown the area over not having electricity for three months and an unrepaired burst drain that was leaking sewerage.

“It’s been over 20 years without proper toilets and houses. Not so long ago the ward committee went to the municipality …. We came back to the community without answers. They told us they are dealing with our matter,” Hlongwa said on Monday.

“We have been waiting and we are tired. Our toilets are not only full, they are falling apart.” Hlongwa said nine families were sharing a toilet.

Attempting to quell tensions in the area, municipality speaker Jabu Ngubo and ward councillor Sibongile Mncwango came to address the protesters. “The municipality has no budget. It doesn’t mean that we are folding hands and doing nothing,” Ngubo told residents.

Ngubo said they would be approaching the private sector for assistance. “The problem is not only in ward 13. Other wards have challenges of infrastructure. We agreed that for a short term solution, the community will be supplied with trucks to empty the toilets. The long term solution is for the municipality to get assistance from the private sector,” she said.

Before leaving, Ngubo urged residents to stop protesting and “give them time” to find solutions to the problems.

But resident Sipho Mdlalose said protests would continue until their demands are met. He said, “The time to protect the image of the ANC is over. We have suffered enough on the expense of our votes. We are not stopping. The ANC has fooled us enough. They must deliver.”

Anna Gasa, 59, said from Slangspruit said she uses her neighbour’s toilet because her pit toilet was full and falling apart. “I’m using the same pit toilet … I have to jump the fence and use my neighbour’s one. It is not in good condition but it’s better than mine,” she said.