We are living with the dead, say Cookhouse residents

Families complain graves are too close to their houses 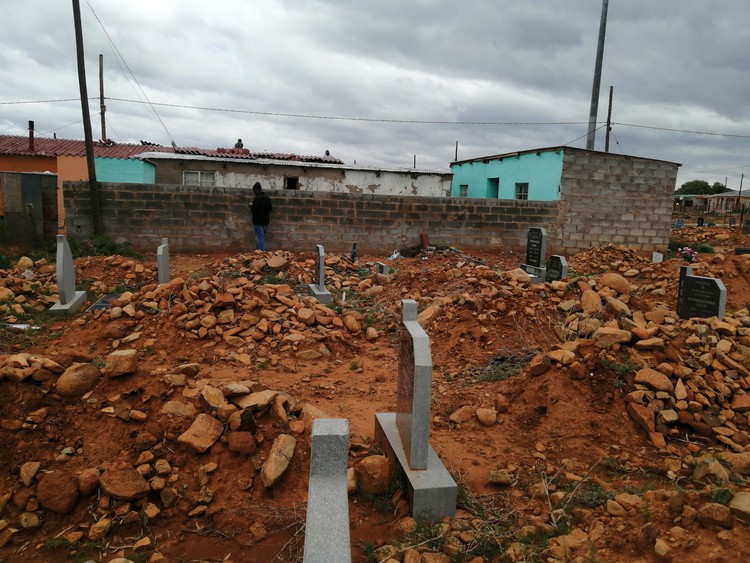 Some residents of Bhongweni township complain that the graves in the next door cemetery are too close to their houses. Photo: Mkhuseli Sizani

About 30 families living next to Bhongweni Cemetery in Cookhouse have been told to reduce the size of their yards to make room for more graves.

The Blue Crane Route Local Municipality’s plan has annoyed the residents of Bhongweni township and the Masizame Trust. The trust claims that it gave the municipality land long ago to build houses and open another cemetery.

Bhongolwethu Mema, organiser of the Trust, said the municipality had been given more than 1,000 hectares of trust land in 2015 to build houses and a graveyard. “The graves are too close to the houses. It is chaos during weekends; while people are being buried in the graveyard others are performing their rituals in their yards.”

“Some of the people had already extended their homes with brick walls. Others were using the land for their pigs, cattle and goats.

Mema said this could have been avoided if the officials had adhered to the purchase agreement. He said the handover agreement had been signed and instead of money the Trust had asked for community development projects that would create jobs.

“The land we gave them was meant for houses and graves. “

“Since then we have been told that the municipality is busy doing environmental assessments. But we don’t know when those tests will be completed,” Mema said.

Wandisa Koba who lives next to the graveyard complained of flies, dogs and snakes from the graveyard. “Both my neighbour and I killed two big snakes inside our homes,” she said.

Sipho Nkumanda was busy reducing his yard on Friday while his neighbours were slaughtering a cow for a ritual. “They are busy doing an ancestral ceremony while next to their kraal there is an open grave. This is unacceptable. It’s like we are living with the dead.”

Bonisile Manxoweni, municipal mayor, said the municipality was merely applying the bylaws. He said every house on a municipal site had pegs showing where the plot ended. People next to the graveyard had built their yards beyond the pegs.

He said the environmental assessment on the land provided by the Masizame Trust had been completed and the building of houses could start. He did not comment on the possibility of a new cemetery but he said there was “no need to panic” about a shortage of grave space. “There is still more space for burials and we will reopen the town graveyard. “

“Flies at the cemetery are caused by pigsties, cow and goat dung. Those who experience snakes should call us and we will go and clean the cemetery,” Manxoweni said.