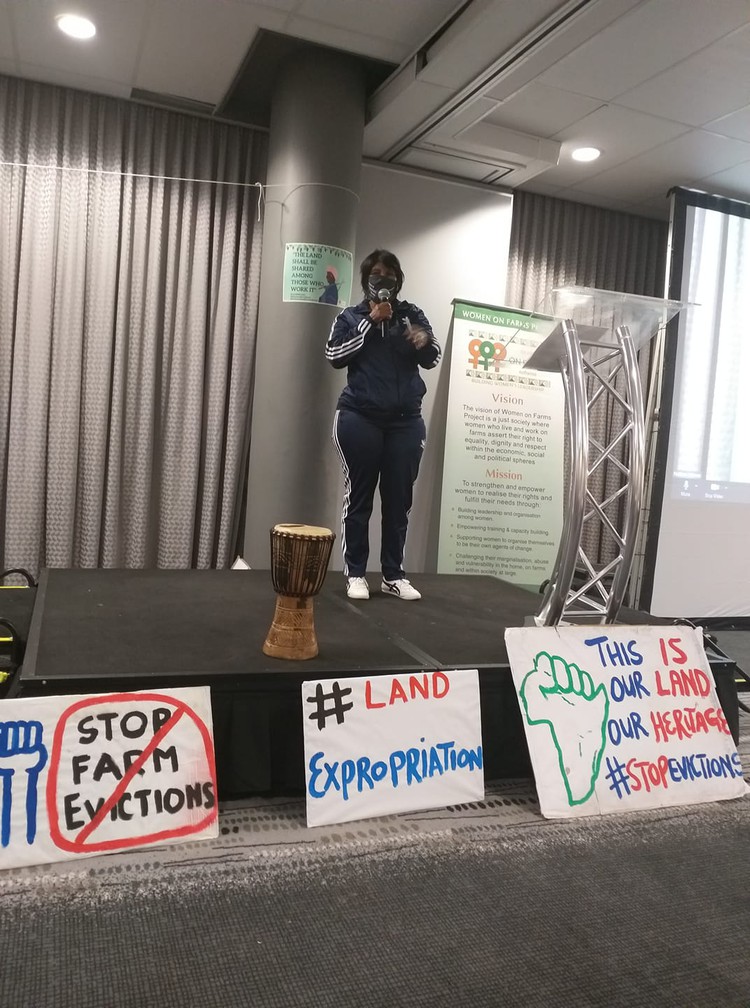 Magrieta Arendse explains how she was evicted from a farm with her children after her husband died. She was speaking at a three-day land colloquium webinar last week hosted by Women on Farms Project. Photo taken from Women on Farms Facebook page

Farms and unused parcels of land sitting empty for years in rural areas will be occupied and instead used for housing and other recreational facilities.

This was the sentiment expressed by dozens of mostly women farm workers and dwellers who attended a three-day land colloquium webinar last week hosted by the Women on Farms Project (WFP). The webinar was attended in person and virtually by farm workers and dwellers from areas like Ceres, Drakenstein, De Doorns, Soetendal and Simondium. Issues discussed included evictions, land redistribution and other struggles faced by farmworkers.

“We are done asking, we have been doing so for 26 years. We are still waiting for a moratorium [on farm evictions] that was promised in 2014. There is so much unused empty land. We are just going to identify land and farms to take. We’ll all go to jail if need be,” said a woman from the Drakenstein area.

Another farmworker told the group that she had already occupied land in De Doorns and was currently growing vegetables to feed her husband and children.

Director-general for the national Department of Rural Development and Land Reform, Mdu Shabane, said the state needed a better relationship with civil society organisations to fix the problems facing farm workers and dwellers.

“We need to go back to the element of tenure security which has been abandoned. Since 2010, there has been little budget expenditure set aside for this purpose. As much as there was money set aside, there has been very little land acquired for farm dwellers generally,” said Shabane.

“There is very weak, if any, state capacity to monitor land rights infringements on the ground. The reality is that the state alone can’t have this capacity. The state has to build a social compact with civil society” to drive land reform, Shabane said.

Shabane said the government was facilitating the finalisation of the Land Courts Bill after which a specific land court will be created to deal with all land related matters. “One of the things the bill will create is a chamber similar to that at the CCMA where land disputes can be dealt with. We are hoping that the legislation will go to cabinet before the end of 2020.”

Mercia Andrews of the Trust for Community Outreach and Education said she too was evicted with her family from a farm in Wellington. “All these years, nothing has changed. We have a government that we voted for. You can blame the commercial farmers all you want, but they are not to blame. The farmers are being protected by our government.

“We must say enough is enough! We must stop complaining and asking for help. We must organise and take our land and farms back,” said Andrews.

Co-director of WFP, Carmen Louw said: “If we continue just talking about the issues, in 20 or 50 years time our children and grandchildren will continue talking about the same issues. We must come to a point where we change the way we do things and come up with alternative plans.

“We must stop being scared,” said Louw.