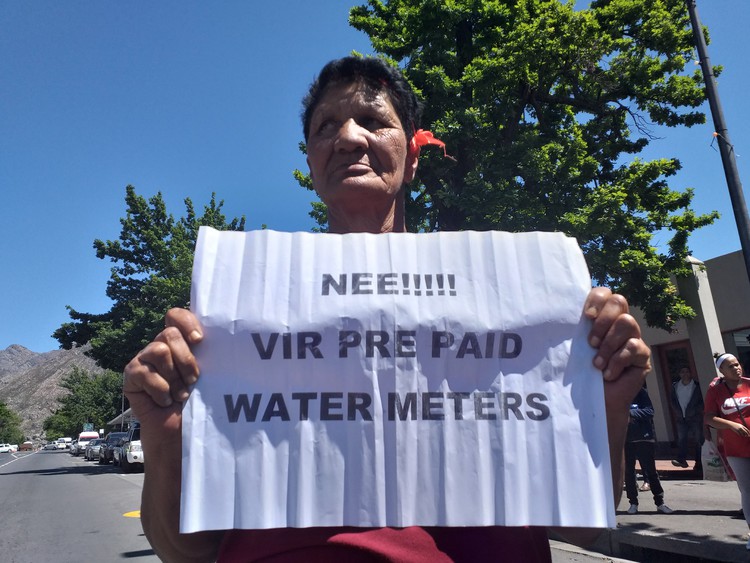 Martha Lucas, from Bella Vista in Ceres, says her indigent subsidy was stopped after she refused to sign for a water management device. Photo: Barbara Maregele

He said some residents “consider water a gift from God and therefore refuse to pay for the resource. Those who can afford to pay must pay for what they use.”

He was responding to a recent protest by residents from mostly impoverished communities against the installation of prepay water meters.

On Thursday, about 100 residents, supported by the Witzenberg Rural Development Centre and the Housing Assembly, marched to the municipality’s offices in Ceres. They demanded that poor people be given the choice of whether or not to sign up for Water Management Devices, which have been a key component of the municipality’s cost recovery plan.

The Centre’s Naomi Betana has accused the municipality of linking the provision of indigent subsidies to the water management devices. “If you don’t agree to sign for a device, then you can’t get the grant. This subsidy is from national government, meant for poor households that cannot afford their full municipal account fees. Now Witzenberg is linking the two,” she said.

Nasson said indigent households received 6kl of free water and 50 units of electricity per month; a full subsidy on sewerage and refuse removal; and 100% rebate on property tax where the value of the house is R120,000 or less. “With the installation of the water meters, the water consumption is set at 10kl per month. Any consumer can apply for an increase, on the condition that the consumer pay for what they consume,” he said.

But Anna Karelse, 53, who lives in Wolseley, says her family, which relies on social grants to pay their monthly bills, does not want a meter. “There is enough water in Witzenberg. Why do they want to make life more difficult for the poor? I was boarded at work due to health issues. My husband doesn’t work, my son is a seasonal worker and is currently at home as well,” she said.

Karelse said she collected and sold wood to boost the R2,400 she received in social grants every month. “This money goes to the house and for food. We have nothing left at month end. I’ve been to the municipality many times to ask for assistance,” she said.

Karelse admitted that she had missed a number of payments, but added that she was trying to pay as many bills as she could afford. “Now my electricity will also be blocked soon. We have lived there for 23 years and have never received any subsidies. We are really struggling,” she said.

Another resident, Martha Lucas from Bella Vista, said her household relied on her monthly pension of R1,700. She said she previously received an indigent subsidy, but it was withdrawn when she refused to sign for a water device. “I didn’t want to sign for a drip service water pressure meter. I refused. I have a disabled child at home and a two-year-old grandchild who needs to bath before creche every day,” she said.

“I have been sent from pillar-to-post and still was not given answers. I went back several times and [a municipal official] told me that it’s because we drink too much wine and smoke, that’s why we are complaining,” she said.

According to the municipality, the dispute over the water devices began five years ago when it was first proposed. Nasson said a decision was made to fast-track the implementation of the devices following rising water consumption and the drought across the province.

He denied that the devices were used as a debt control measure but said they were used for “the management of a scarce resource”. He said the municipality had held a number of community meetings since then.

Nasson said that Witzenberg was battling to recover escalating bad debt from indigent households which currently stood at R1.5 million per month. He said many people were refusing to pay for services.

“Any arrears impact negatively on the liquidity of the municipality and hamper service delivery,” he said.