After reports were sent to cabinet, water test results have not been released for five years 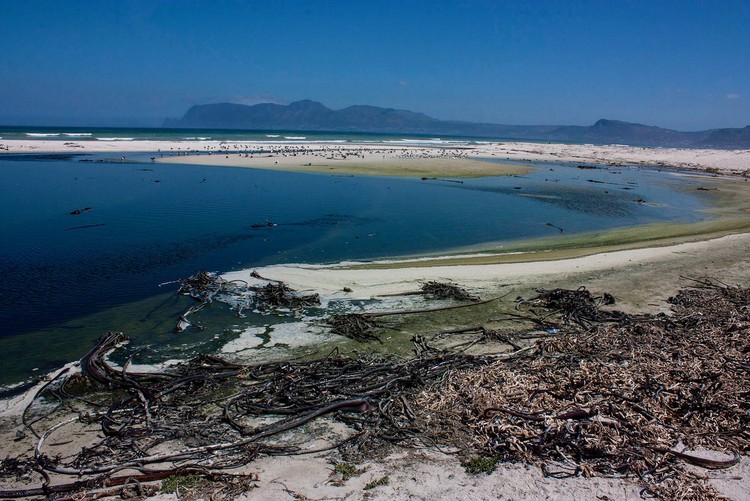 Green-brown water flows directly from the Cape Flats sewage works into False Bay at Strandfontein and remains trapped in the surf zone. The last full national Green Drop Report of 2011 scored the quality of this treated water at 20%. Without independent testing, it is very difficult for the public to find out if it has since improved. On the day this photograph was taken, 23 February 2018, the sewage smell of the water remained strong despite a breeze coming in from the sea. Photo: Steve Kretzmann/WCN

A countrywide water shortage is a decade away unless urgent action is taken to rehabilitate and preserve our rivers and catchment areas, fix and maintain crumbling infrastructure, and implement water re-use.

Without intervention, South Africa faces a deficit of about 3,000 billion litres of water per year by 2030 the Department of Water and Sanitation told a ministerial interactive session on transformation in Boksburg on 15 February.

That is three times more than South Africa’s total current household usage. At 237 litres per day, which is what the DWS states is average household use, the 14.5 million households (2011 census figure) use over 1,250 billion litres per year. To this must be added agricultural, industrial and business use.

The new National Water and Sanitation Master Plan to ensure water security was presented by deputy director-general Trevor Balzar. Along with co-ordinating budgeting, planning, and implementation across departments and spheres of governments, the DWS announced its intention to:

However, the department’s Green Drop Report, which was welcomed by scientists as a way to improve wastewater management, was not mentioned in the department’s press release, nor in the presentation of the master plan.

But the Green Drop Report, which was introduced in 2009 as an annual audit of the country’s 824 sewage works, has not been published in any form since 2013. How functional these wastewater treatment works are is an indicator of the health of our groundwater, rivers, vleis, estuaries and, where they release into the ocean, our coast.

The last Green Drop Report indicated that over four million litres of untreated or inadequately treated sewage was flowing into our rivers every day, according to Parliamentary Portfolio Committee on Water and Sanitation member Leonard Basson. He suspects the situation has got worse in the intervening years.

The 2013 report is only available as an executive summary that shows provincial, and not municipal performance. The last full Green Drop Report that drills down into the waste treatment plants managed by every municipality dates back to 2011.

It appears the five-year gap in information is due to a lack of capacity in a department that until recently was run by Nomvula Mokonyane, who was accused in testimony at the Zondo commission, of receiving Bosasa largesse. But there is also a strong indication that withholding the Green Drop was a political decision by Cabinet.

In the 2013 Green Drop Report summary, just under half (49.6%) of treatment plants achieved a score of 50% or less, and almost a third (30.1%) were in a critical state. Some have since failed altogether.

Balzar’s presentation says that about 56% of municipal treatment plants are now in a poor or critical condition and need urgent rehabilitation, with some 11% completely dysfunctional. This, states the DWS, “is having a significantly detrimental impact on the environment and driving up the cost of water treatment”.

The dysfunction of treatment plants in the Emfuleni municipality, from which raw sewage has been flowing into the Vaal for years, according to Save the Vaal chairperson Malcolm Plant late last year, resulted in the SANDF deploying technical teams to help restore the crumbling infrastructure.

The polluted Vaal River is a popular recreation getaway for Johannesburg residents and a source of irrigation for agriculture. Fortunately, Emfuleni is downstream from the Vaal Dam, which supplies drinking water to Gauteng.

But according to the chair of the portfolio committee on water and sanitation, Lulu Johnson (ANC), the Hartebeesport Dam, which provides drinking water to Brits, has had raw sewage flowing into it due to breakdowns at the Madibeng municipal treatment works. The dam has been severely polluted for decades due to treatment plant failures in its catchment area, despite almost R1 billion spent on trying to clean it up.

Meanwhile, infrastructure failures, combined with drought, have led to severe water shortages in Makhanda in the Eastern Cape, where taps run dry for days and residents have to line up to fill containers from water trucks.

All not necessarily well in the Western Cape

The Western Cape, although it achieved the top provincial Green Drop score (84.5% in 2013), had problems with its sewage plants. Some of them were in Cape Town.

The 2011 report revealed that the Cape Flats sewage works in Strandfontein scored only 20% for wastewater quality compliance eight years ago. Whether the Cape Flats sewage works has improved would be of interest to the many Capetonians who swim, fish and surf at Muizenberg and other close-by beaches. Water treated at this plant flows into False Bay.

One of the worst provincial performers was Cape Agulhas municipality with an overall score of 34%. The municipality’s sewage works at Struisbaai received zero for wastewater quality and its sewage works in Napier scored only 15%.

Municipalities may assure residents all is now well, but the gap in information from a separate state body that has the mandate to do so means independent testing of inland and coastal water quality falls to civil society and academic researchers.

Senior Professor Leslie Petrik at the University of Western Cape’s Chemistry Department has raised concerns over pollution on the Atlantic seaboard where marine sewage outfalls are situated.

Dr Jo Barnes, a retired University of Stellenbosch epidemiologist, is looking at the state of the Kuils River and she doesn’t take the City’s statements that all is well at the Zandvliet wastewater plant for granted. But such oversight is ad-hoc and has no legislative weight.

One reason for the failure of the DWS to produce Green Drop reports, which are currently the only way to keep track of the health of the country’s water bodies, might be because the information they contain is politically embarrassing. The DA-run Western Cape has consistently achieved the highest score, despite having its own pockets of failure, and Gauteng, which is also now in DA hands, came second.

Responding to questions from the Parliamentary Portfolio Committee on Water and Sanitation in September last year, the DWS deputy director-general of regulation, Anil Singh, said the 2013 Green Drop report had “huge policy implications”.

The transcript of the meeting recorded by the Parliamentary Monitoring Group records Singh as going on to say: “A decision had been made that the reports needed to be submitted to the Cabinet for consideration. The reports had been considered. That was why there had been a non-release of the reports.”

Singh is referring to the full 2013 reports, and there is mention in portfolio committee meetings of a 2016 Green Drop Report, which remains hidden.

Johnson did not want to be drawn on the clear political inference of Singh’s statement, but said there is “a serious issue of capacity in DWS”.

The lack of capacity meant that not only was no water quality audit produced, but the department was not able to hold polluters accountable, whether they be state or private institutions.

Johnson said the DWS could not plan effectively when it did not know the quality of the country’s water, particularly given the status of South Africa’s rivers. In Parliament, he said it was “no wonder” there was a crisis at the Vaal River.

No response was forthcoming from DWS.

This article was written for GroundUp by West Cape News.