Waste reclaimers in court over right to work 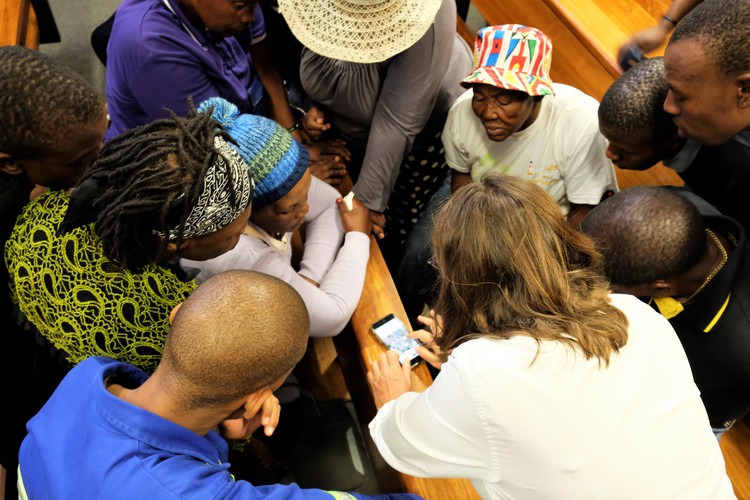 Waste reclaimers and their lawyer discuss the case outside court. Photo: Elna Schütz

Wastepickers facing eviction from land in Centurion are arguing that the City of Tshwane must provide not only alternative housing but space for their materials.

The group of 200, some of whom have lived and worked in the area for 15 years or more, want the City to provide alternative accommodation and space to store their materials near their work. The eviction case against them was brought by the landowners, Turnover Trading, with the reclaimers, and the City as respondents.

On Tuesday Judge Neil Tuchten at the Pretoria High Court ordered the acting City Manager, Augustine Makgata, to comply with a 2018 court order telling the City to provide details of alternative land for the reclaimers. Makgata, was ordered to appear on 17 February and show why he and the City should not be held in contempt of court.

The municipality is offering a property in Sunderland Ridge, which it says in court papers is being cleared and provided with infrastructure such as housing, sanitation, and water, to accommodate the reclaimers for three months.

The property is about 15km away from where the group currently lives and works, and would only provide for their accommodation, not the storing or processing of their recyclable materials.

Lawyers for Human Rights, who represent the reclaimers, maintain that under the Constitution and the International Covenant on Economic, Social, and Cultural Rights, they have a right to work which would be undermined if they were not given a suitable space to live and store or process their recyclable waste.

The LHR’s Thandeka Chauke says that the ultimate question posed by this case is whether it “is just and equitable to evict someone if it will not only leave you homeless but leave you without an income”.

On Monday, the parties tried to negotiate a settlement but could not come to an agreement about appropriate land.

Steven Leeu from the African Reclaimers’ Organisation says the group’s wish is that the municipality provides a proper place where people can stay and work.

Leeu says that among the waste reclaimers there are mothers and elderly people who cannot easily pull trolleys long distances. The choice of location is also crucial because the group operates specifically in the Centurion area and needs to remain close to this source of income, he says.

The area where the reclaimers are now living is nicknamed Mushroomville because it was once a mushroom farm.