Ward councillor locked out of her office 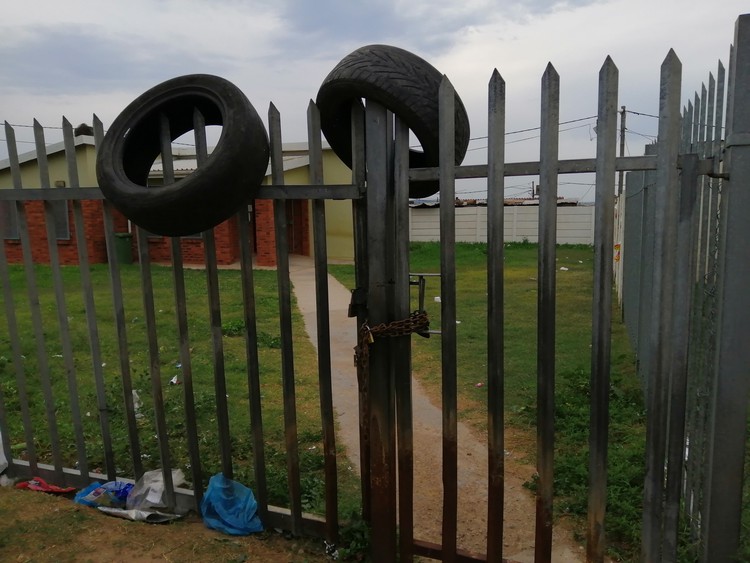 The owners of several small businesses locked ward 47 Councillor Nontuthuzelo Skweyiya (ANC) out of her office in KwaNobuhle township, Uitenhage for about five hours on Monday. They were joined by about 30 angry residents of the area.

The singing business owners demanded a 30% share of the paving of Sivo Street, a project which had started earlier in the day.

When she came to report for duty, Skweyiya was greeted by a rusty chain, a new lock and some tyres that were hung on top of her office gate.

The protesters shouted, “Neither us nor the residents know about this project.” and “We want 30% from it … finish and klaar.” They sang “Silwela amalungelo ethu [We are fighting for our rights]” and “Isikhalo somntwana sihoye [Listen to the cry of a child]” and “Amabhulamnyama andenziwari [Black boers make me worried]” blocking Poswa Street with tyres.

The councillor was flanked by police and community policing forum members when she saw the locks changed.

Resident Phumeza Makeleni said, “All they want is 30%. And we as residents want transparency from the councillor.”

Ward committee member Siphiwo Pityana, who has a small business, said a project for wi-fi installation and a park project in the ward had benefitted the same people. “We are not fighting with the councillor, we just want 30% of the current project. She works with the task team who benefit from ward projects.”

But Skweyiya said the money had come from the national treasury via the Nelson Mandela Bay municipality. “I cannot allow anyone to stop this project, because the money will return back to the government again.”

“Some of you say they are not fighting with me yet you locked me out of my office. Time and again I explain the same thing: there is no 30% in this project. My interest is to see service delivery and that’s all.”

Protesters dispersed and opened the councillor’s office. They said they would meet again on Tuesday.