Waiting by the roadside desperate for work 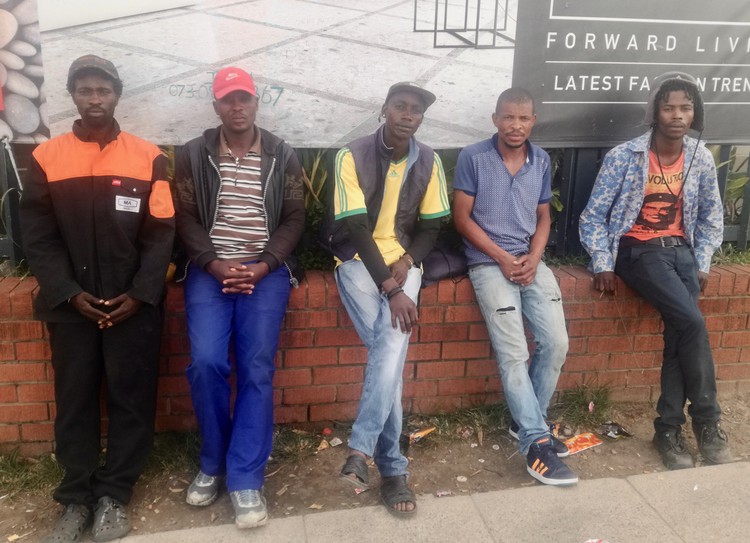 In the morning on Amalinda Road, East London, men wait by the roadside, hoping for piecemeal work. Some have the tools of their trade with them. They are gardeners, builders and painters. By 3pm, most of them will given up. They will be back the next day.

According to the Stats SA Labour Force Survey for the first quarter of 2017, the Eastern Cape experienced the biggest increase of the provinces in its unemployment rate. It increased by 3.8 percentage points to 32.2%.

On the day GroundUp joined the men by the roadside, only two people found jobs. Elvis Fuzile was not one of them, but he has frequented the roadside since 2012. At other times he does carpentry jobs for people in his community. He moved to East London from King William’s Town looking for work.

Some, like 33-year-old Luzuko Harry and 44-year-old Mluleki Bhemba, don’t give up until six or even 7pm. Then they will walk home to Duncan Village, four kilometres away.

“We just waiting for those people that are coming [home] from work and would like to have their gardening done or any small job around the house,” says Harry.

The last time he got a job was two weeks ago when someone hired him to put up curtains. He was paid R100. He has not had stable employment in three years.

Harry came from Mooiplaas. “I left home because I wanted a job. I have a child which my mother supports with her social grant … I don’t like that; I want to be able to provide for my child.”

Bhemba last had permanent employment 15 years ago. He worked as a painter for a construction company. He arrives at the roadside at 6am.

“Some people work far, like construction companies, and leave early in the morning. That is why I come here early so they can see me when they drive past,” says Bhemba.

He has three children. His wife does part-time work washing laundry. His children stay with their grandmother. “There are times when we both [him and his wife] don’t get jobs, and there is no food. I don’t want my children to go through that. With my mother, they are guaranteed food every day,” says Bhemba.

The last time he worked it was a gardening job a week ago. He was paid R120.

“Sometimes you can go weeks without getting a job …. Or maybe just once a week if you lucky, but there is no stopping – you don’t know when you will be lucky and get offered a job,” he says.

Bhemba says one cannot be choosey about the work offered. “Sometimes you learn on the job because you want the money, and you want the person to come to you the next time they are looking for someone.”