Oak Valley has obtained an interdict against protesting workers 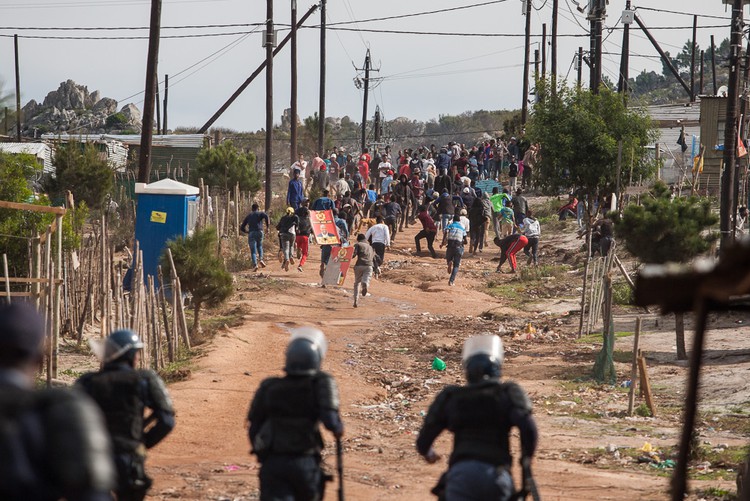 Negotiations between Oak Valley Estate and the Commercial, Stevedoring, Agricultural and Allied Workers Union (CSAAWU) appear to be deadlocked.

Since 6 May protests have blocked the N2 outside Grabouw. There have been several clashes between police and protesters. There are also divisions between Grabouw’s township residents over the protests. But last week the workers suspended the protests pending negotiations with Oak Valley.

CSAAWU’s Karel Swart said negotiations were deadlocked on the question of wage increases following meetings between Oak Valley management, the union, farm workers and Grabouw residents. Swart did however say that progress had been made on the secondary demands for eradication of labour brokers and hostels.

The workers are demanding R250 a day.

Swart said that the issue of single sex hostels had now become a “human rights issue” . He said he didn’t expect this to be solved overnight but the farm had “25 years to correct the situation.”

Bahia Sterris, Acting Provincial Manager of The South African Human Rights Commission, confirmed that the commission is investigating the “the discriminatory nature” of “a Grabouw farm’s” hostels.

Oak Valley Estate employs over 270 permanent workers and is home to over 470 people. Swart said that over 450 workers have downed tools and the “farm is quiet”.

But Christopher Rawbone-Viljoen, Managing Director of Oak Valley denied that the workers are still on strike. He said that most employees had returned to work although the “situation remains tense”.

Rawbone-Viljoen said that Oak Valley had suffered a loss of production and damage to property from the strike. He said that on 20 May, an interdict was obtained from the Western Cape High Court ordering the union and its members to “refrain from any intimidating and violent conduct”.

Farm workers and union members are expected to march to Oak Valley Estate again on Friday.