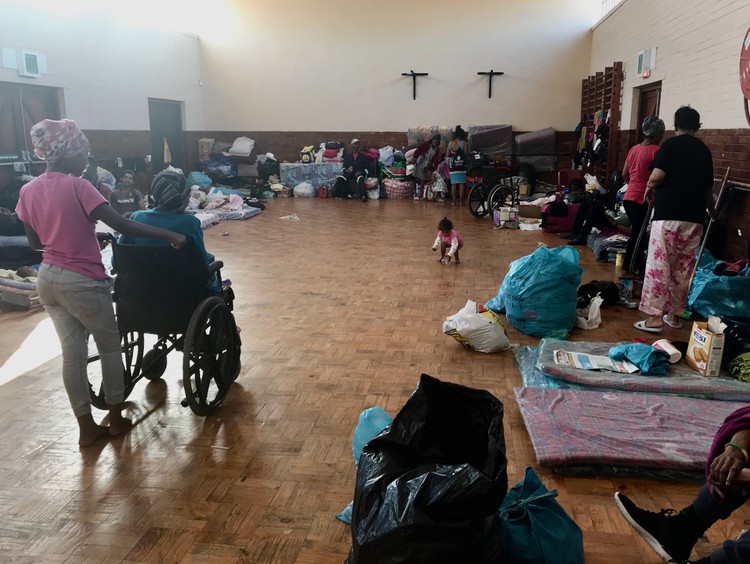 Over 60 people, including about 30 children, have been sheltering at Silvertown Community Centre Hall, Athlone, for three weeks after their shacks were destroyed in a fire at Vygieskraal informal settlement. Photo: Tariro Washinyira

Over 60 people, including about 30 children, have been sheltering at Silvertown Community Centre Hall, Athlone, for three weeks after their shacks were destroyed in a fire at Vygieskraal informal settlement.

Mymoena Privy, who survived the fire, said a pensioner and a four-year-old child had died in the blaze on 21 October which consumed 200 homes.

Privy had lived in Vygieskraal for 30 years. Her two children and four grandchildren are staying with her at the Silvertown hall. The first nights after the fire they slept rough. “Because it’s a wetland it was freezing,” she said.

She complained that they had not received emergency building kits to rebuild their homes and that she had never seen their ward councillor visit the hall.

Amiene Lawrence, who had been in Vygieskraal for 14 years, said it was the second time she had lost everything in a fire. The first time was in 2014.

Lawrence is heavily pregnant. She lost her ID, and her childrens’ birth certificates, school uniforms and stationery in the fire.

Magdalena Wagnaar said it was tedious living in the hall. “Not even a radio to listen to … We get the same food all the time, chicken and rice or samp. Sometimes inside the chicken are very big hard potatoes. This is why we miss our homes.”

She said they lacked privacy. “Children are restless, the place is overcrowded. In the afternoon elderly people need to rest, but they can’t because of children’s noise. People’s belongings keep on disappearing.”

After the fire, people had been sheltered at the Lutheran Church in Belgravia, but it had needed to resume its normal operations, Pastor De Vries Bock, the Dean of the Evangelical Lutheran Church SA, said in a press statement on 1 November.

Pastor Michael Wall of the Apostolic Faith Mission said, “It is the duty of the state to uphold the constitutional rights of people. The Minister of Social Development, Deputy Minister of Human Settlements and the Mayor, who met with the affected community, must be called to account for government’s inaction.”

Imam Dr Rashied Omar of the Claremont Main Road Mosque and Bock said the City of Cape Town had failed to implement practical steps to restore normality to the area.

“The role of churches and mosques are limited in providing pastoral support to the affected community and can only provide emergency relief,” said Omar.

Omar extended gratitude to the Gift of the Givers, Belgravia Neighbourhood Watch, Humanitarian Relief Work stream, the community development workers, volunteers and the hundreds of people who responded to the call for support and provided much needed aid and assistance to the people.

Councillor Malusi Booi, Mayco Member for Human Settlements, said that the City’s engineering team was on site on 29 October to re-block the area to secure access roads for emergency vehicles, fire-breaks and walkways for the community. Booi said 19 kits were issued to backyarder fire victims.

“However, due to community unrest and political interference, the team’s work was stopped and they were escorted out of the area by City Law Enforcement,” said Booi.

“Residents requested that the building materials, which they had initially refused, be delivered to them. In addition, they requested further levelling of the area. This was completed on 4 November through the intervention of the City’s Solid Waste Department,” said Booi.

On Wednesday, the City said it was making progress on site and “awaiting final consensus from the community”.